Several years ago, (many, in fact....too many...) just after my graduation from college while I was still a young, naive and gung-ho-feminist-gonna-be-cop with an attitude, I had the undeserved grace to work with a couple of guys who weren't afraid to be men. 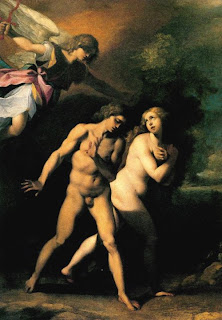 I didn't realize at the time that they spoke a very solid, theological truth to me; after all, what an unlikely source! As I came to learn, though, they served to prove that God designed men and women very differently from each other, and to recognize those differences is not demeaning; rather, it glorifies God and sanctifies us all with the dignity God intended us to have.


You may be asking what wonderful truth these raggedy, trash-talkin', conceited tough-guy stereotypical men imparted to me?
I'm glad you asked!

One winter night we went out on the town and had a few brewskis and a few shots. I was a new addition to the management of our department (with them), and apparently that night at the bar was my "initiation" of sorts. We had worked together for a couple years, but my promotion was recent, and with my promotion, they finally had the freedom to tell me what they really thought.

That night I enjoyed their friendly, if challenging company, and was happy to be "one of the boys" which was a role I was used to filling.  In my college years, the reality was that most of my friends were guys. I could relate to them easily, and they liked me because I liked things such as weapons and learning hand-to-hand combat. And if someone got into my face, I was not real willing to back down.

Also, I could drink Tequila straight from the bottle and swear not just a sailor, but a pirate right under the table. I'm no longer proud of that gift, nor am I capable of it anymore, but at the time it endeared me to my male counterparts. At least to a professional degree.

Anyway, that evening as we waited for our next round of shots, we discussed women in Law Enforcement (a very personal topic for me), and we discussed women in the military. I was all for sending women into combat; I was a strong advocate of women in any and every role and made no bones about it. My male colleagues disagreed. One of them because, as was my impression, had been raised by a chauvenist pig and so became one, and the other arrived at his opinion from the point of view from his indoctrination as a Marine, Special Forces.

In either case, my instinct was to completely disregard their old-fashioned archaic oppressive opinions as worthless drivel.


Just the same, those guys' words have never left me, as much as it used to pain me to admit it.
The first thing I thought of when I learned about the Theology of the Body was the conversation I had with my   male friends that night. Pope John Paul II, had he been present with us, would have been nodding along with them while they told me about the facts regarding men and women.

Those guys explained very candidly that men have a natural instinct to protect women.

They agreed that women can indeed defend themselves, can do many or most of the same jobs men do, but women have to work harder to do it. (This was a lesson that came home to me about five years later when I trained for and was hired by the Fire Dept.) Their acquiescence to the idea that women had abilities, however, differed from their argument, for ultimately, they weren't talking about doing...they were talking about the foundation of BEING!

Carefully, trying to help me understand, these guys, these friends and co-workers of mine tried to explain that  (in a combat, law enforcement, firefighting situation) even though men realize women don't want any help if they are struggling with a task, men will still want to help them. Thus, in a combat situation, men will instinctively put themselves, and even other men at risk in order to help a woman, even if she is a soldier fighting alongside them. They will do it for the good of their unit, for the good of their country, for the good of the woman...possibly to the detriment of all.

I refused to see his logic and tried to argue that we women don't WANT protection, and we don't NEED protection. I was missing the point...he was attempting to explain to me that it wasn't about what women wanted...it was about how men are designed and that no matter how much they tried, they could not suppress their internal instinct to protect the women around them.

This argument went on for hours. Literally. It went on all night.  I had lost it from the beginning but refused to let it go. My friends finally gave up, realizing that I simply was not going to see reality, and really wasn't even trying. I was too busy holding onto an ideology that saw human biology as "unjust".

The only problem was this: I HAD begun to see it their way, but I simply would not admit it or give up my feminist perspective. It was easier to hold on with all my might to what I wanted to believe, that which would serve my own personal ideology, than it was to look to the expertise of these men who had real-life experience to back up what they were saying. 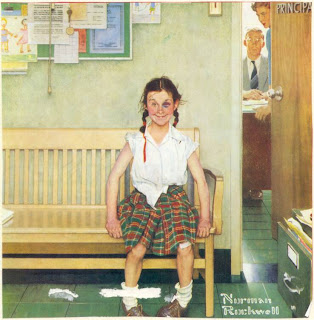 One of them spoke from experience in combat, but was prohibited from giving examples as his examples were classified. The other spoke from a heart he didn't want anyone to know he had.  Both, in practice, were really a couple a jerks, but both, also, were real men who understood the fundamental differences between the sexes; differences I was afraid to acknowledge for fear it would make me less than I tried to be.

In the end, I learned the lesson the hard way, and only through understanding it have I come to embrace the Truth. I don't regret my foray into Law Enforcement or Firefighting, and I still support women's presence there, for women do bring a particular charism to the Job. However, I do advocate that women who take that route understand who they are, their limitations, and the limitations of the men with whom they work.

Men and women are NOT the same, but are designed to be complimentary to one another, for the good primarily of the family, secondarily to society.

The combox is open. I am truly interested in what my readers have to offer on this topic.
As a reminder, I do not allow anonymous comments. Make up a handle to identify yourself. Thank you.
Posted by Adoro at Monday, July 05, 2010

Glad I dropped by this morning, Adoro, your thinking and writing never disappoint. Understanding ourselves is one of our greatest tasks. I always beware of those who don't reflect on themselves because they can hang your for their headache. Thanks for this post.

Well, Good morning Father (Evening, here!) Thanks for the comment and yes, I agree...understanding ourselves is one of our greatest tasks, second only to the fact that we also have to accept the truth about ourselves no matter how unflattering it is!
(I'm still working on that...)

Equus ~ Actually, this conversation didn't change my view of men. Their argument made me realize I actually might be wrong. That is a very different thing.

It wasn't about my view of men that was at issue; this entire post is about my view of the ROLES of men and women. I've always been pretty on board with the role of men; the only problem I had was with my trained understanding of the very being of women.

That did not change in this conversation; my mere philosophy was influenced for the better.

Ultimately, what you're asking for is my conversion story. You can go all the way back to the beginning of my blog and find a couple early posts on the topic regarding what I thought about men and women and sexuality..and who we are as human beings! ;-)

Ah, I see. I certainly enjoyed the post, in any case.

On a related note to your post; I definitely think there is a place for women in the military, but I believe it is a very bad idea for single mothers to join. Or for both spouses (if they are married parents) to enlist. One hears about it all the time, some truly heartbreaking situations. And I'm thinking, people, use a little common sense!
Love that picture! It has the look (and attitude) of my younger sister.

Hello, I read a copy of this in a friend's journal and decided to follow the link back to contribute my two cents.

Assuming, for the sake of this comment, that there is some sort of essential male and female nature. Then, the fact that you desired these jobs seems to indicate that something in the female nature that drives her towards protective jobs such as police officer of firefighter. So, while it might be unreasonable to ask men to suppress their instinct to protect women around them, it seems equally unreasonable to ask women to suppress the their instinct to go out and take part in these careers.

I enjoyed reading your post in its entirety. I just feel strongly that women who make an earnest attempt to follow their calling are not receiving any special favors just by being allowed to do so.

Thanks for your comment, but please understand; I am not stating women shouldn't be cops and firefighters.

What I AM stating is that men and women have actual biological differences that need to be acknowledged.

I will say this, however: after what my friends said, I would agree that women do not belong in combat. I know women who have served in the military, very strong women...who would agree.