I have just returned home from an amazing week.

It's also a week that proves that I am among the geekiest of Catholic geeks. Think about it! What do NORMAL people do when they take a week off work? I, personally, don't know. I'm not normal. (Surprise!)

Early Sunday morning I headed into the depths of Wisconsin corn fields to find the Oratory that rose as if planted from the depths of the fruitful land in the midst of Mennonite and Catholic farmland....and there, my "journey" began with a beautiful, contemplative Mass in the Extraordinary Form....

Iconography Reveals the Soul of the Iconographer

Icons are Scripture, which is why they are "written" as opposed to "drawn". Compare the work of an icon to that of the Word of God; when the monks of yore, St. Jerome, for example, bent over the candle at his desk, he sought to copy down EXACTLY what was written before. They wanted, and DID pass on to future generations, even 2,000 years later, what came from Christ Himself and His Apostles.  An Icon is the same; it is ancient, it is Scripture in pictures, in every line, color, shadow, and highlight.

Throughout the week, the icon began to take shape, little by little. It is made by many many thin layers of paint, delicate brush strokes, and in my case, mistakes that had to be covered up!

The icon Sister chose for us to write was Holy Mother of God "Three Handed", and the feast day of this particular icon, in the West, was July 12; the day we actually put paint to the lines.

What began as a mere trace, over the hours and days, slowly took form. It was an experience of Creation, nearly liturgical, for it seemed to me to follow the pattern of Genesis, finding its completion on Friday so that on Saturday, we could rest.

Those familiar with iconography are aware that they also need to be "prayed". I found I often had to "step away" from it and pray, and a few times took it to the chapel to look at it from a distance, evaluate what was needed, re-offer it to God and ask for help, in the words of scripture, to "bring it to perfection."  Indeed, the icon reveals the soul of the iconographer, not just in the lines but in the process itself!

In a humorous moment, however, as the Madonna's face began to clearly emerge, I paused, thinking that something about it looked, well.....very familiar!

Ah, yes; I had unwittingly made the Mother of God into my own image;  I had given her my nose!

So, without further ado, I present to you, my readers, a photo of my very first icon: 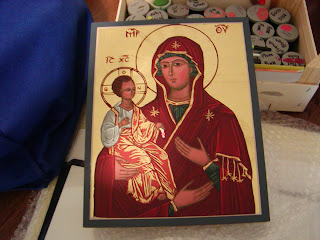 Yesterday morning it was placed on the altar at Mass (Extraordinary Form) and blessed. Soon I will begin work on my next icon.
Posted by Adoro at Sunday, July 18, 2010

I'd be interested in an extended theological reading (if that's the right word) of the icon.

Beautiful! I love making it into the orthodox churches around here for their diversity of icons and what you can learn from them. My parish had a class on writing icons earlier this year... but it was offered on the same night as confirmation class, which I deemed more important.

Very, very nice! I love that it was started on the feast day of the icon. I'm really impressed.

Mark ~ Thank you. I don't know everything there is to know about iconography. If you look at my recent post (from June 27) on Our Lady of Perpetual Help, that will help you understand this one, too, to some degree. There are some common elements in those with Mother and Child Jesus.

As far as the history of the icon I will probably cover that in another post.

Believe it or not, iconographers don't automatically know "all about" the icon itself. It is a practice that goes even deeper than just the symbolism. (I may write more on this, too...but still pondering it right now!)

eighthsacrament ~ I love their icons, too. The Byzantine Church I visited this spring had such a beautiful iconostasis!

Terry ~ Thank you. We actually traced it out on Sunday so that we'd be ready to lay paint Monday morning and really begin it!

I just finished blocking my next one, OLPH.

What a beautiful window into heaven you have written with this Icon!
Thank-you.

That is soooo cool! I wish I could do that!

Mike ~ You could! It's a process, and as they tell me, they've never seen a bad icon! You might be surprised at what you can do. :-)

One day when I have lots of money I will commission you.

Until then, you only get my praise... eventually, you may get my pays...

I prolly wont grow up to be a rapper.

Hey Adoro, miss ya. Glad to see your beautiful icon. New computer up and running but no old files yet. just for your records srpetra@centurytel.net

Joe ~ I'm thinking I need a LOT more practice and knowledge before commissioning can ever happen!

Sister! ~ Miss you all, too, and good news on the computer. Hope you get your old files back!

Congratulation! I was in Ukraine and I "tasted" east Church. It was wonderful and mystical experience.

Best wishes from south of Poland! :)

Kostek ~ Hi, and thanks for visiting from south of Poland! :-)

I've been to a local Ruthenian Byzantine Church here, and got a full tour of the iconostasis, deepened my appreciation for icons!