During Lent, we are supposed to draw closer to Jesus, but that's difficult in a world such as ours, isn't it?  Many of us grew up watching cartoons that portrayed the conscience every now and then. They were typically a cute little red devil on one shoulder whispering sweet nothings of encouragement to do the wrong thing juxtaposed against a very un-fun white angel giving solid direction to do what was right and good.

In our world, we're surrounded by many voices and temptations. We're surrounded by nearly pornographic images in magazines, on buses, on TV, and merely turn on a radio stations to hear the latest gossip of a sexual nature ranging from anything from the guy next door to the DJ's to celebrities or whatever Jane or Joe has grabbed the headline due to some obnoxious and depraved immoral act.
We are surrounded by voices that denounce our faith by holding up examples of those who didn't meet it so well, or at least are accused of not having done so.
We are surrounded by people who hate the Church, hate Christianity and are more interested in mindlessly spreading lies about the Church, tempting us to give into those lies rather than seeking the truth for ourselves through legitimate historical documentation the Hitlery Channel and A&E refuse to consider for fear it would completely wreck their ratings.
These voices tend to become the most shrill during Lent, and even as we try to seek the silence and prayer, we are called into outright battle, either from our knees or in verbal defense of our Faith. And if we refuse to fight, we are at risk of being assimilated into the destruction of  the cacophony of annihilation.
That's what happens to the fallen away Catholics and other Christians; they give in to "The Nothing" in the Swamps of Despair that make up our secular world.
STOP! What voice are you listening to?
Tonight I was reminded of a training incident in which my life was literally hanging by my fingertip. 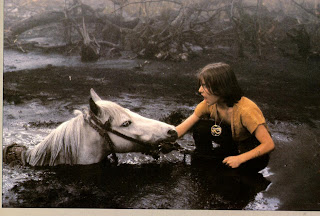 In that incident, I can still remember the loudest voices demanding that I do the wrong thing - the thing I KNEW was wrong, and even though I wanted to give in to those terrible demands, and was sorely tempted to do so, there was a stronger instinct to just hang on. To pray. To wait for help, even as I felt the rope slipping away.
And there he was, the Captain who refused to be shrill, refused to be loud and was only as loud as necessary so that I could hear him. So it was that his instructions cut through the noise, for rather than calling for me to give up, he saw in me a survival instinct he chose, as a good teacher, to build up. He didn't want to see me let go and fall, but rather, to learn from the struggle.
It was to his voice I responded, for his reason cut through my panic, his brief instruction cut through my defiance, step by step until I could follow him.
It was the smallest voice that was the most powerful, and the voice that may have quite literally saved my life.
So it is with Jesus.
This Lent of 2011, we have seen the wind, and the earthquake, and the flood, and the fire, (1 Kings 19) but the Lord has not been in those things; only the cacophony of the popular media. The Lord has been present to those who suffer, but it was not He in those things in and of themselves. Those events were mere distractions.
The Lord is in the voice we refuse to hear, the interior voice that gives direction, cutting through the noise and exterior disasters.
The Lord is in the smallest voice, the whisper in the wheat the underscores the tornado's gale. It is in the crumble of shale and limestone in the fury of the earthquake, and it is is the silent falling of ash in the tumultuous explosion of the volcano. His voice is in the mysterious footprints in the soot left after the wildfire, and in the most insignificant debris left after the floods. His voice is in the animals fleeing before what is coming, but never leaves anyone behind.
No matter what the source of the Roar, the Lord can be found speaking quietly in a register the gales can't touch, for it flies beneath the radar to pierce us through hidden and deeply personal means.
I spoke of that day at the Tower, that terrible day, and even now, I am coming to understand the lesson ever more deeply. Truly, I won't ever forget the Captain's voice cutting through my panic, working with me instead of against me, asking me to work with him in following his direction. He saw my faith and called me to reason, knowing that was the bridge between equal failures.
So it is that we struggle in the same way during Lent. We try, we fail, and every day we are faced with the assault upon our senses and intentions. Every day we are called especially to seek Our Lord, and the sad thing is this: we relegate this struggle only to Lent and, in a lesser way, to Advent.
Although this struggle takes place every day of our lives, we only give it attention during penitential seasons, and we try to play it down to make it more comfortable. The reality is this: the path to holiness is not comfortable.
We are willing to sacrifice much to lose weight or get in shape or become healthy or get a better job. But to become holy - we give it two brief seasons encompassing 10 weeks out of 52 in an entire  year, then totally disregard the rest as though our lives and souls are meaningless. 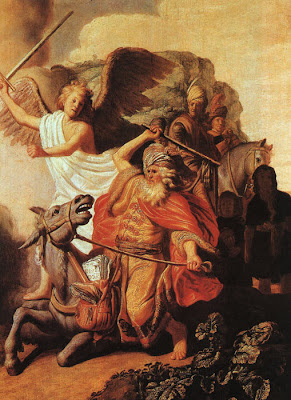 It's no wonder we complain we can't hear the voice of God; we don't listen long enough to take His voice to heart.
Posted by Adoro at Friday, April 15, 2011

Great post. Everyone from any faith that calls for spiritual struggle can relate.