The Spiritual Life and Agility Training

This week, I had the wonderful opportunity of introducing my dog to a couple Agility obstacles. I'll admit to being a bit nervous before we began since I haven't worked with her much on obedience lately. Much to my surprise, though, once we were "at bat", she ignored the children watching this training exercise, and the other dog that had otherwise dominated her attention. 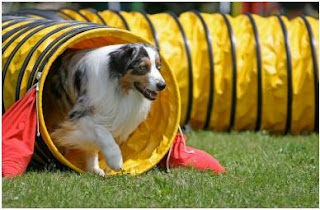 (It helped that I had her favorite "high value" treat:  freeze-dried liver.)

Teaching her to go through the tunnel turned out to be very easy. I'd introduced her to it when the obstacle was brought in. She wasn't fearful of it in any way although she had no interest in exploring its depths. I tried to get her to go in but she simply turned away and I didn't push her - it wasn't time yet.

Awhile later the trainer pulled the tunnel into the middle of the classroom and scrunched it up to make it as small as possible so that the dog could look through it and see that I was on the other side. When I called, she came and gobbled up the treat.  The trainer lengthend the tunnel so that it was just a little longer than the length of her body.  Again, no problem. My dog came through and gobbbled up the treat. We continued this process until the tunnel was at full length, requiring the trainer to stand at the entrance with the leash in her hand while I walked to the other end to coax my dog with the nummy treat.

Finally, though, we had to take the next step:  put a curve in the tunnel so that she couldn't look through and see me at the other end. The trainer explained to the children (and of course, to me) that this obstacle is an exercise in trust. The dog had to come to understand that when she entered the tunnel, she would meet me on the other side. She'd already been through it so knew what the tunnel was, but the question was...would she be frightened away by the curve that did not allow her to view the nice treat and enthusiastic praise awaiting her at the end?

We gave the command and I walked the tunnel, ready to greet her on the other end. Sure enough, she came through but this time was different; after she'd reached the straightaway, she was so comfortable inside that she paused to investigate an interesting scent. I explained to the children what she was doing, much to their delight. This was a good sign and a necessary part of her training that would help her with other obstacles later.

Finally satisfied, my dog completed the tunnel and came to me for her treat. I took her leash and brought her back to the start. As the trainer explained to the children that although rewards are used in initial training, they must be taken away. You see, the dog discovers that the obstacle is fun all on its own; the obstacle becomes its own reward, so they have to learn to pass through it then look to their master to be directed to the next event.

As the trainer spoke, holding the leash, my dog took it upon her own iniative to enter the tunnel. Realizing that this must be encouraged and rewarded, I gave her the command (not that she needed it that time!) and ran to the end to meet her as she emerged, smiling her happy doggy smile.

Mission accomplished; that ended her tunnel lesson for the day. She "got" the lesson, she discovere the tunnel was fun, that I would meet her on the other end, and she had learned to instinctively look for me as she exited. Should I get the chance to work with her further on Agility, I will no longer use the high value treats, or any treat for that matter. Instead I'll be learning how to direct her to the next thing.

Agility and the Spiritual Life

It may sound strange, but my dog learning this obstacle is a nearly-perfect analogy for our own spiritual lives.

In the beginning, as we come to know God, He gives us many rewards to entice us to enter a life of prayer and communion with Him. So it is that we receive many consolations, but once we have established that we understand and plan to continue our prayer lives, God slowly withdraws the consolations, leaving us with "spiritual dryness."

He asks us to pass through that tunnel, first so that we can see Him, eager to receive His reward for us, and then maybe He throws in a bit of an obstacle, asking us to trust that He will be there even if we can't see him right away. And then, once we have reached that level of trust, even though it is a very basic level, he asks us to pass through that darkness again - but this time not to receive a reward, but rather, to grow in our faith, learning to look not for a reward, but another lesson that will build our relationship with God.


In short, we stop looking for mere treats and instead look joyfully for trials.
Of course, this is where the analogy ends; we are not dogs. A dog only knows what is in front of it and needs our constant guidance to understand what we want them to do; they cannot reason, they cannot know their final ends, and they can not act in a way so as to "choose the good."  That is a purely human privilege.

Sometimes when we pass through that dark obstacle, we come out, as my dog did, looking for God, but He isn't there. As the trainer demonstrated yesterday, she went and stood on the other side of the tunnel so when her dog exited, she looked in the wrong direction and had to pause to find her Master. That's exactly what we do!

In our Pride, sometimes when we pass through spiritual trials we make an assumption about what God is doing, so when we are released, we are looking in the wrong direction. Then we get frustrated and lose our peace.

Indeed, it is good that we are seeking God, but not finding Him where we expect becomes a lesson in humility on the way to deeper trust. We must continually learn deeper and deeper trust, for although Our Lord may not always be where we expect, we can be assured He is still there, waiting, ready as soon as we are to take us more deeply into the lessons He has for us.

Some days, it seems I learn more from my dog than she does from me. No wonder dogs are man's best friend; they certainly must be one of God's closest allies in getting us to Heaven! ;-)
Posted by Adoro at Friday, January 21, 2011

Agree with the above comment.Of course when you write about such things it all begins to make sense!Agree also, that dogs ,in the way they live their lives are a lesson to us all.Wish I was so trusting and as compliant as my own dogs.

A Catholic Comes Home ~ Clearly I need my dog to make these things clear to me, too! Yes...they do give us lessons don't they? I wish I could be half the person my dog thinks I am! ;-)

Great post! Give Fuzzy a hug and a treat for me.

Isn't it great how God allows us to learn spiritual truths from our day-to-day lives? Some of the best "sermons" I've heard were when weeding the garden or sitting by a creek or walking along the ocean!

NC Sue ~Well said! God wants to speak to us through our small everyday events..so he does!