Why I Will Never Forget

This is a re-post from September 11, 2005, my first year of blogging. It tells the story of where I was that terrible day in 2001. Everyone has a story but back on that day, I was a Firefighter in Training, and on that day, we didn't just get a lecture on sacrifice; we became witness to it. 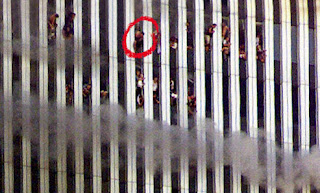 Let us remember in prayer our brothers and sisters whose lives were lost on this historic day.

Let us especially pray for mercy for those terrorists who are responsible for so many lives. Let us pray that those who plan similar events be converted and instead, lead people to Christ and heaven instead of the eternal damnation they are choosing.


I will never forget this day only 9 years ago.
That Tuesday morning, I was a firefighter cadet at the ominous Training Tower, only a few weeks from graduation from the arduous course. The city that employed me had a long program of academics, followed by six weeks at "The Tower".

The tower days consisted of roll call and SOP's (Standard Operating Procedures), maybe a quiz in the morning, and a synopsis of the day's activities to come. On that morning, September 11, 2001, as we sat discussing "high fires", which refer to skyscraper fires, and the procedures utilitzed to fight them, the Deputy Chief of Training burst through the classroom door, carrying a TV set.

He apologized for the interruption, stated that a plane had just flown into the World Trade Center, and hurriedly set up the TV until there was reception. All of us sat transfixed as we watched the South Tower burn. Then, before our eyes, another plane hit the second tower. 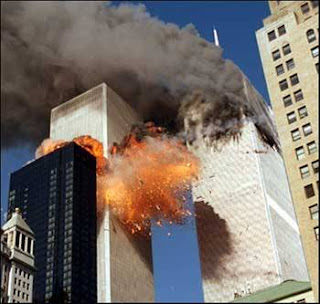 We had had trainng in Weapons of Mass destruction, terrorism, and from our EMT class, lessons in triage. We'd practiced different types of rescues, but nothing prepared us for what we saw that day.

The training captains, recognizing in the midst of the attacks that this was indeed, a teachable moment, used this as an example of what we were to cover that day. They explained what the New York Firefighers were going to do as they approached, as they set up, etc. One captain emphasized the need to coordinate the evacuation of citizens from the towers, the mass response due to the 2 planes, and the understanding that this was a terrorist attack...this was no accident.

All of us realized that if this was no accident, there might be more attacks to come. What was the next target?

I remember asking the Deputy Chief, "At what point do they determine that it's time to leave? Who makes the decision that a structure should be evacuated?" I appraised the heavy fire showing in the upper floors of the tower, the fuel from the jets, the obviously collapsed floors which were directly affected by the planes.

Finally they told us that we would be watching this for days and weeks to come and it was time to hit the apron to begin our day. Just as we finished our warm-up exercises outside, the Deputy Chief threw open the door to his office in the temporary building in the yard and ordered us over.


He revealed that a plane had just hit the Pentagon, and one crashed shortly after near Pittsburgh. He told us that the towers had fallen. 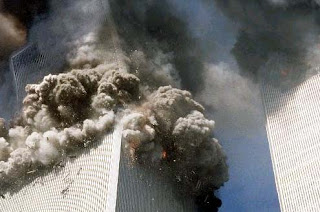 The Dep. Chief's face was red; his voice shook with genuine emotion. He had tears in his eyes as he ordered us back into the classroom; our schedule for the day was changing; this was a whole new playing field, unprecedented at any point in history.
The good Deputy Chief apologized for having initially sent us out as though it were a normal day.  He told us he had no idea this was going to be this big. Tearfully, he revealed to us that he had at least 20 friends with the New York department he knew had just perished beneath the weight of those buildings. He had to sit down as he discussed those he'd ridden with in the past; those NYFD collapse rescuse firefighters who had given him much of his knowledge. He apologized for his emotion, but without need; I think most of us were in tears already, men and women alike.

Others in our class also had friends and relatives in New York, and one of our training captains had family both in the city and in the Pentagon.

Those who were not directly affected still had tears in their eyes whether out of sympathy or just plain shock at what was happening on U.S. soil.

Our city was placed on alert, of course, ready for an attack. Even though we were cadets, for all practical purposes we were considered to be Firefighters, and in the event of an attack they would put us to work. We were not allowed to leave for lunch, but food was brought in for us, and we watched as Police Officers brought their dogs over to sniff all of our buildings and personal vehicles.

We did end up doing some traing that day, each evolution taking on a special meaning. We walked up the cement steps of our 6 story tower, carrying hose bundles and tools, remembering dead firefighters with every step. We sprayed water onto non-existant fires, remembering the futility of the same actions in New York. We dragged wet hoselines down and cleaned up, considering those who had died that day never got a chance to clean up. Indeed, many people would never be found.

We removed our turnouts and hung them in the shed, exchanged our air tanks, and finished our day, preparing to go home, realizing that somewhere around 300 firefighters were not going home to their families that day.


We gathered in the classroom for the end of the day summary, and one of the captains gave us this speech:

"All of you saw today what happened in New York. Consider how many firefighters died today. You will never be able to claim that you don't know what this job is about. Every single day you go out there you don't know what's going to happen or if you'll make it home. Those who responded today planned to go home after their shift...and instead, we're going to be watching funerals of firefighters for weeks. You know what this job is about and you know the risk. So after witnessing something like this, if some of you, or all of you, choose not to come back tomorrow, we will all understand." 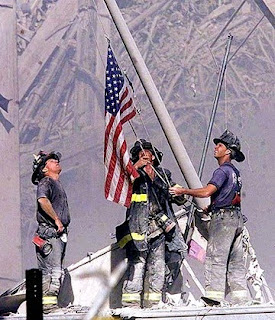 With that, we were dismissed and there was never such a somber, silent exodus from the Tower. There was no joking; there were no plans for the evening. There was only the knowledge that many had died that day, and we were wearing a similar uniform and training to carry out the same job...and possibly pay the same debt.

And the next day, all 22 of us returned.

I will never forget where I was that day because I was standing in the very shoes of those who died. I wore a similar uniform and I had similar aspirations. I went through their same movements as we set up a response to a fire in a skyscraper and fought it. But training took on a new tone after that.

I was injured in training about a week later, and as a result, I am no longer a firefighter although I was sworn in with my class. I can't say that I'm disappointed to not be there anymore. However, that said, I will never forget where I stood, how I felt, or the weight of the turnouts I wore when I watched other firefighters die in a city far away. I'll never forget the pride when I saw the survivors respond to find either other survivors or recover their dead.


I will never forget the world turning to prayer, offering condolences, or their realization of the sacrifices real people made right under their noses day after day.
And so to all the firefighters and police officers, paramedics, EMT's, and other responders out there, I salute you, I offer my condolences, and I will continue to pray for your safety. Keep up the good fight! We would not be a community were it not for you. Perhaps I am not called to stand in your shoes, but I respect you so much more for I understand what it takes to be where you are, and to give what you are required to give.

And for all those who perished on September 11, 2001,  may you rest in peace in the arms of our beloved Savior, Jesus Christ, and may He comfort your families as you continue to grieve their loss.


WE WILL NEVER FORGET. 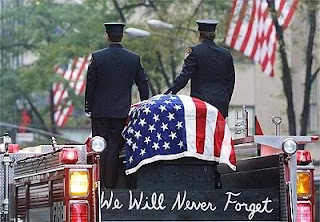 Email ThisBlogThis!Share to TwitterShare to FacebookShare to Pinterest
Labels: September 11 2001

How absolutely beautiful, Adoro...a real tribute to courage, valor, duty and honor.
I was a first year seminarian in CT when this happened; we came out of our moral theology class to hear that NYC was under attack; with horror we watched the planes hit the Twin Towers...for days, every airplane overhead was a source of paranoia; many in our seminary community had family, friends, co-workers that either died or were in the Towers.
The Franciscan Friars of the Renewal had a direct connection (one was my classmate from NY)...
it was a very direct and personal experience.
May the Lord grant eternal rest to all those who died; may He give comfort to the survivors and to the families of those who lost loved ones.
May He give us all a conversion of heart that will make us ever so ready to die for Him, no matter what.
Thank you.

Nazareth Priest ~ I think all of us, everywhere, began to look differently to the skies after that day, and I admit even now, when a plane seems to be flying too low or maybe a flight path has shifted, I go into high alert. I didn't hear the planes or see the smoke like you did, but, as they say, the knowledge of the thing makes it more real....

What a wonderful post! Glad I stopped by tonight to read it.

I just wanted to thank you for sharing your story. It only has 3 comments and I don't really know what to say in response to something so true and heartfelt but I wanted you to know that someone read it and was moved by it.

It still brings me to tears - some things aren't meant to be forgotten.