The Violent Bear it Away

And from the days of John the Baptist until now, the kingdom of heaven suffereth violence, and the violent bear it away. ~ Mt 11:12 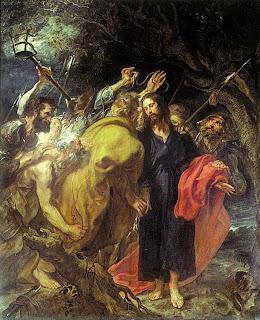 This evening I went early to the Church to spend a final hour in Adoration. I  noticed Father come into the chapel, but initially did not pay attention as he was not vested. Suddenly I became aware that he was giving the customary benediction and others in the chapel had gone to their knees. I did as well, and watched as Our Lord was taken from the monstrance and the Blessed Sacrament reserved in the tabernacle were removed in solemn silence. The sacristan blew out the candles and left us staring into the open tomb of the empty tabernacle.

I pondered the violence of Holy Thursday, realizing how violent it was to my spirit to watch my Lord carried away at a time I did not expect. In past years there had been more time for Adoration...but not this year. Sadly, I moved into the Church to prepare for the first part of the three-day Mass that makes up the Sacred Triduum.

After Mass I returned to the chapel, to the Altar of Repose, planning to remain this year until the very end.

It is always with trepidation that I spend these last hours with Christ, going from the Last Supper and joining Him in His Agony in the Garden.  Tonight, I pondered the violence, the necessary violence, that makes up Lent and the Mystery of our Redemption. I meditated upon the necessary violence we must do to ourselves to overcome our own passions, to make our own sacrifices, in preparation to receive and understand the sacrifice of our Savior.

It is fitting, and it will always be fitting.

Tonight, as the Hour drew near, one could sense the tension in the chapel, as all who remained were aware of what was about to happen. Recalling the scene 2,000 years ago, I thought for a moment that I could nearly hear the sound of clashing armor, heavy footsteps, and hard voices. I could nearly see the torches that lit the way. And yet, there, in the chapel, the Garden, there was peace and silence in the presence of the Beloved. It grew to a point, though, that as much as I dreaded what was going to happen, I was ready, for I knew that if Our Lord was not taken away, our Redemption could not take place. 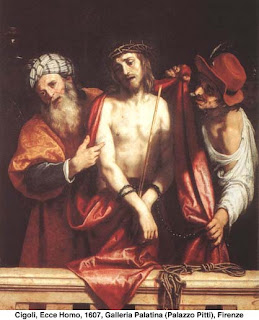 Still, even prepared, as the Priest approached the Altar of Repose with great reverence, and removed Our Lord, even though liturgically there is no violence, yet somehow, violence was done to my soul as His Presence was taken from me. The candles were extinguished and the tabernacle stood open...empty.  I knelt were I was; I found that I could not rise. The violence of the Sacred Triduum has born me away, too, drawing me more deeply into the Mystery of our Redemption.

So it is that in stricken silence and anticipatory grief, I follow Jesus through this night of trial and persecution, through scourging and the crowning of thorns. I follow Him, because I cannot stay away. Even as I so often deny Him like Peter, I will continue to follow, for only He who is born away by the violence of the Cross is worthy to be followed, and worthy of the suffering caused even by the attempt.

As the violent bear away Christ our Savior, so, in suffering violence does He go to bear away our sin.

Tonight, they have taken Him away to be Crucified for our sins...
Posted by Adoro at Thursday, April 01, 2010

Thank you, Adoro. The Holy Spirit has given you a beautiful gift to be able to write like this about our Lord Jesus Christ. There is a lot to meditate on in this post.

I know what you mean! I wasn't ready for it, and I was alter serving, so I should have been!