I'm about to go off on a rant, but maybe not the kind people like. I don't happen to enjoy it myself, but I'm going to say it anyway because it needs to be said. (Yes, I know every ranter thinks like this. Fasten your Rosaries and Divine Mercies anyway) 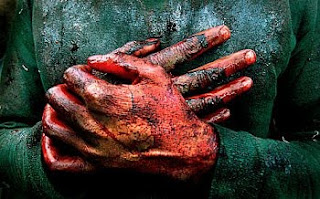 This weekend in class, our professor shone a light on some of the things I've written about here, but he stated it in a way that helped me both to see more clearly and convict me more directly.

Look around the blogosphere. Look at the most "popular" blogs. Look at who is being followed and regard  the comments.Consider the CONTENT of the blogs with the greatest number of followers.

What do they write about most often? What position are they taking?

Most importantly...at whose expense are they taking it? To whose glory?

As our professor pointed out; we humans, in our fallen nature, have this terrible inclination, almost a reflex, to put others down in support of our own opinions. He further pointed out that in so doing, if our "opinions" are actually official Church teaching, putting others down to edify it doesn't work. In fact, it does the polar  opposite.

I don't repeat this here apart from my own bloody-guilty hands. Believe me; my own keyboard is caked with the blood of people I've verbally scourged and at my own particular Judgment I'll have to answer for their souls and the souls I've damaged through such scandal.

As my professor was speaking, I considered many of the blogs I follow, as well as those I have actually stopped following in the last few months. Last night I took a few minutes and browsed my blog feed, and was shocked at how many "faithful" bloggers spend the majority of their time tearing down what they see as "the enemy" even though that person might well be sitting in the pew next to them.


As my professor pointed out:  we spend so much time glorifying ourselves while putting down others that the house next door is burning and we can't even hear the screams for help.
Being a faithful Catholic isn't about right or left or liberal or conservative. Most people don't even know what those terms really mean! I know people who claim to be "conservative" Catholics but can't be bothered to go to Mass on Sunday. I know people who claim to be "liberal" Catholics and toe the line but dislike Gregorian chant!

And yet, it seems to be a knee-jerk reaction for us to immediately pigeonhole someone into this or that camp, and then smear them for a position or belief they don't even hold!

We need to remember the theological virtue of Charity and live by it...not just spout the word.

True Charity wills the good of another, and in willing that good, sees that other as, first and foremost, someone for whom Jesus DIED a horrible death.

We CANNOT, as bloggers, base our blogs on tearing down others in order to make ourselves look good in the eyes of other sinners like us who will be fueled to add their own gripes, their own judgments, and their own form of superiority at the expense of sinners who apparently aren't like us.

There are those who are in error because they've never been taught differently, and are advancing those errors not out of intent to destroy the Church, but out of simple, inculpable ignorance. And there are those who know the true doctrine, and so are called to proclaim it...but not at the expense of the souls they destroy in operating as smug self-important jerks as they "Anathema sit!" all over the place in the diarrhea they fancy as their theological "expertise."

Unfortunately, this category isn't limited to lay bloggers, but includes members of the clergy as well, and the scandal they (snarky Clergy bloggers) cause by such practices does even greater damage.  Heck, if Fr. X and Y can say such things, then so can I, and gosh, if I write like they do, then I gain esteem not just in their eyes but in the eyes of THEIR following....etc.

Yes, we know that this or that parish on the corner or in this or that city has some major problems, and that it has become malformed Fr. XY's own personal litterbox. Whatever. Yes, we know souls are being led astray.

Since when does yelling and screeching and shaming about these things actually effect conversions?

It doesn't. It chases people away. Not just those against whom such tirades and derision are directed, but those who witness it as well.

If we don't know what that means...it is an act of charity to be silent, not just for the souls of others...but for our own.

I'm sorry, truly sorry, for the scandal that I have caused and I am working hard not to do so ever again. I know that my apology means nothing to those whom I have scandalized, for they are not here to read it.

I beg those who are my readers to forgive me for causing scandal, and that you pray for those souls I've chased away out of my own pride in seeking my own glory at both their and YOUR expense.

I can't speak for other bloggers, nor do I judge their souls, but I do judge their actions and this, in particular.  Do we need to shine a light on what is wrong at times?  Certainly! The Church Fathers were not adverse to such things!  The modern question is this, though:  Is it really necessary to focus our lives on ripping on thy neighbor in order to proclaim the Truth?

The Truth doesn't need a defense. It simply requires an intelligent statement of fact backed up by actually living it through the theological virtues, especially that of the divine charity of Jesus who died for the very worst of sinners.

A good reminder for the Catholic "blatherosphere". :)

As I say, all things in charity, nothing to glorify ourselves. Charity is the theological virtue which we love God, from which we love our neighbour, a good reminder my friend :)

I have few followers and no awards. My blog has been called "sweet" and "nice." Occasionally I will tackle a contraty topic. I just want my blog to be a love letter to God.

Excellent, and hard hitting, as is often the case with your posts, I needed to read this.

What I got from the post, reminded me of a quote, that I used to have at the top of my blog

"Be kind, for everyone you meet, is fighting a hard battle"

Fr. X and Y and even "Fr.Z" Well, if we are going to be truthful here... and, our beloved plurkdom too.

And yes... plurkdom, too. The venue isn't limited.

AMEN. which is why i frequent the popular blogs less than frequently. and subscribe to none. Lurk when I do read. rarely, if my opinion / insight is different from those already offered, and not going to feed the trolls, I may comment. Please God, all in charity - at least I try. Thanks for the reminder.

Adoro,
Thanks for having the courage to say what many of us may have been thinking and feeling. I just did a sweep of the blogs I am following and stopped a few.
I like what Angela M had to say. Our blogs being a love letter to God. I try for that and know I too don't always succeed.
All for His glory not ours and not at the expense of others.
God bless!

And those who do think about reforming themselves often tell everyone about it and thus, among other things, violate modesty, invite all sorts of bad advice, and are unnecessarily tempted to pride.

These seem to me to be the chief troubles of blogging.

A few years back I started reading a lot of Catholic blogs in case it helped me sort out my lapsed position. I was shocked at the vitriol I encountered: it didn't entice me back anywhere. There are just a few Catholic blogs I continue to follow.
I even started a 'catholic' kind of blog, but before long I had been 'attacked' on it: I still have one for my occasional use, but it is 'hidden'.
My 'regular' blog is one I often use to 'celebrate' my everyday world, especially with photos. For me, that is sort of the way I praise God.

Thanks, Adoro, just yesterday I was struggling with my tendency to offer too many opinions. It's this terrible temptation of mine! I don't think I do it much on my blog these days, but in reader comments and on forums I can get really opinionated. I've been trying to soften and really think, "What is the best way to respond?" Instead of "Oh I NEED to make this point... "

Another thought, from the perspective of an editor. Please, please, PLEASE do not ever start a "Letter to the Editor" with the phrase, "Shame on you." Okay, I realize there is real evil in the world. But trust me, even if the writer or editor you are addressing has an evil agenda, this line will shut them down instantly. It is not productive or charitable and makes a lot of presumptions on a person's motivations.

It's very rare that we truly have the "right" to shame another person. Very rare. In fact, I am not sure we ever do.

I personally have been the recipient of this line many times... the vast majority of the time the person has genuinely misread the article or simply holds a different opinion that is not dogma or doctrine. (Besides, trust me, I would never knowingly promote something that would go against Truth).

Another tip in the blogosphere? Read the full article, not just the title. *Daily* I see assumptions made and comments fired off based only on titles.