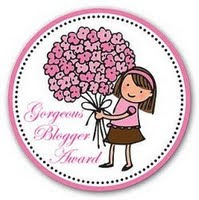 I am very touched to learn that MONIALES OP has tagged me for the Gorgeous Blogger Award! Last summer I visited their monastery and have to say that I wished I'd had some of that very interesting information while I was there!
While they gave 6 little-known facts about their monastery, as I don't live in one I wonder if maybe I should give some little-know facts about my house?
Nah. My house is boring. It consists of walls and a roof and is basically a really expensive box I bought to keep my stuff in to ensure I'll be up to my eyeballs in debt for about 1,000 years after my death.
OK, so, six little-known facts about me:
1. I sang "La Bamba" and "Stand By Me" with a Blues Band in Puerto Escondido, Mexico. This was not karaoke, but an actual performance, albeit impromptu. The irony of singing "La Bamba" as an American in Mexico was not lost on me even while I did it.
2. I have been to the Shrine of Our Lady of Guadalupe in Mexico City twice, once in 1994 and once in 1996. I did not see the actual site of the apparitions, and was not actually a practicing Catholic at the time. Yet...it wasn't a waste. God knew what He was doing.
3. I was awarded "Rookie of the Year" for the Ski Patrol. It was an honor, and completely blew me away. Doesn't mean a lot now and I doubt anyone remembers. I rarely do.
4. I can only cut my own bangs a couple times before it looks like a hack job and I can't delay a good haircut any longer. As a result I only get a professional cut about twice per year.
5. Only brush with fame:
While in college I was assigned to a "mystery" security detail; my superiors asked for assistance and wouldn't tell me why. Curious, I said yes. My directions: Show up at the station at X time, but dress as a college student. Leave your uniform at home. When I arrived I was granted the temporary title of "Special Agent" and informed that an Investigator and I were part of Maya Angelou's official Security Detail.
We went to a particular location owned by the University that was hosting her and my specific job was to meet her vehicle, show my official ID and badge, and direct her driver to follow us to the official venue. Due to several circumstances they were late and her people called our people and asked us to meet directly AT the venue. We entered, made sure there was not an uprising or protest, walked among the crowds and remained vigilant with pre-set signals should any trouble arise. We learned during this time that Ms. Angelou did not sign autographs (her own personal practice of trying to maintain humility), so were surprised at the end to be summoned backstage. She wanted to thank the people who had been ensuring her safety.
I had NO IDEA what I was going to say. I was just a dumb college student meeting someone I'd studied briefly in a class, never expecting to actually come into contact with her! She greeted everyone in turn and I said the same inane thing others had said, "It was a pleasure hearing you speak." She shook my hand, glanced at me a moment, paid me a compliment with a soft smile, greeted the few behind me and then went on her way.
While driving back to school that night, I mused, "My friend Lita is going to DIE when I tell her I met her heroine! And I have NOTHING to say other than I shook her hand!"
I have never told a single soul what Ms. Angelou said to me that evening.
6. I hate talking on the phone, especially since my 5 years in Insurance with a phone attached to my head, whether I was in the office or "on the road" looking at cars. Email is preferred because that way I can deal with it when I feel like it and don't have to dial a bunch of code to get to a long message that never ends.... (much like the nature of my blog...)
TAGGING....
Charlene Duline at Prodigal Catholic Writer - A woman leading outreach to imprisoned Priests! God bless you!
Kiwi Nomad - Kiwi has great photos and commentary and you should check out her work and story.
Tina at Jake's Takes - Jake has great takes! (Jake is a Basset Hound) Please help Tina with his particular need....
Fr. Charles at A Minor Friar - I always learn something from him, especially his charity, in the proper theological sense.
Uncle Jim - Whom I miss and want to see again! (And has an epic story going on...)
Passionist Nuns at In the Shadow of His Wings - As I was tagged by a Monastery, it is fitting to tag another, especially because I have a friend there! God bless her and them and please keep all Religious Sisters in your prayers!
*
Posted by Adoro at Saturday, November 14, 2009