If You Are What You Should Be...

....You Will Set the Whole World on Fire!

I am currently reading, for the purpose of writing a paper, "The Dialogue of Saint Catherine of Siena", one of my favorite Saints, and one I know has been interceeding for me for a very long time.

Yet I am constantly struck by the slander against her. There are some who would take the above quote and apply it to their dissident "theology", taking it as their motto as they seek to usurp the laws of God.

How ironic. If any of them bothered to ever read her actual writings or the revelations to her from God, or her questions to God the Father, they would be silenced in complete and total humiliation.

Just a few weeks ago, a woman I know brought St. Catherine into our conversation, and lamented that women today aren't as strong as she was. This particular woman was once a member of a certain religious community that shall remain nameless, but it's one that trumpets worldly and immoral causes such as gay marriage and female priestly "ordination". When I said that I was reading this book, she said that maybe she should as well, for St. Catherine is her patron Saint. I truely hope she does so.

This very same woman was taken aback when I dared to mention that as a woman, St. Catherine was very strong as an example for the women of today in her successful work to bring a Pope into submission to God; for she literally stated that if the Pope remained a single day in France, it was a mortal sin. The woman in question told me, "Well, I don't know about that..." clearly offended by my repetition of this objective occurance in history. But let's just say she's one that can't understand why I would teach children and their parents that there is such a thing as "mortal sin".

Right. I consider Hell to be far more violent than the suggestion that we can offend God in such a way that we sever our relationship with Him.

Since then, I've also come across the blogs or other articles of two (or more) religious sisters who are also comparing St. Catherine of Siena to the dissident and highly mislead (and misleading) Srs. Prejean and Chittister, among others.

What is so shocking to me is that those Sisters aren't even in the same league as St. Catherine of Siena; the ONLY comparison is that they are all female.

The left-leaning spiritual miscreants that have arisen in past years clearly haven't bothered to actually read the words of this great Doctor of the Church; for if they did, they would not DARE to use her name to advance their causes. They try to usurp the name of St. Catherine to support radical feminism; yet if they actually read the revelations, they would realize that St. Catherine was in the world, but not of it, and the last thing she would do is support political and immoral causes, the like of which absorb the time and morality of too many allegedly "religious" women of our age.

This group likes to use the name of St. Catherine because she stood up to the Pope; it was she and St. Bridget of Sweden who brought a close to the Avignon Captivity, and an end to the false Popes, restoring authority to Rome and revealing the true Pope in a time of division. St. Catherine probably saved that Pope's soul, for no sooner had he heeded her words that he was in mortal sin for every day he remained in France, that he returned to Rome and died, hopefully as a loyal son of the Church. A new Pope was elected, unifying the Church once again.

St. Catherine was not a feminazi or a Democrat; she was a holy woman who respected the authority of God and His Vicar, and sought to RESTORE proper Church authority. She was a unifying force, an instrument of God Himself.

She doesn't compare to today's dissidents for one main reason; she was not out for power for herself, but rather, to call a Pope to CONVERSION and restore the Divine Order that had always been intended. She was not looking to change the Church to meet her own worldy purposes, but instead, she understood the Divine Nature of the Supernatural Hierarchy of the Church, and worked within it to restore what was corrupted by sin.

She did not deny sin; she denounced. She is a heroine to women everywhere for she knew what it was to be a woman; and that the Church needs good, holy women in order to bear fruit.

I pray that before I die I will see the good name of St. Catherine of Siena restored, nevermore to be usurped as an unwilling spokesman for immoral causes.

Those who think she challenged doctrine need to read Dialogues and her other works; perhaps it is only through her own words that she will, on behalf of Christ, convert those who seek power and fame as opposed to St. Catherine's clear foundational virtues of humility and obedience.

St. Catherine of Siena...PRAY FOR US, that we will set the whole world on fire!
* 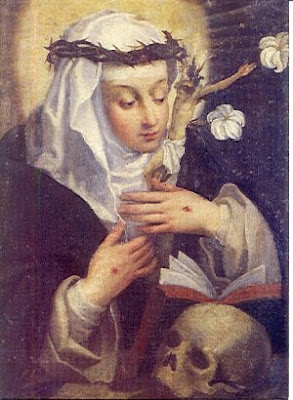 Do you know, My daughter, who you are and who I am?

- Words of Our Lord to
Saint Catherine of Siena
The Dialogue
Posted by Adoro at Tuesday, October 14, 2008

The same thing can be said about St. Francis of Assisi...the things people say and do in his name, scandalous...I could go on all day...but I'm in the office :)

Excellent commentary!
While I have not heard nuns use St. Catherine in this way, I am very aware of their twisting of anything that will work to their liberal advantage. As Joe says, St. Francis has been hyjacked by all sorts of goof-balls be they religious or secular like PETA people. I think I may barf if I hear his over used and abused quote, "preach the gospel always, and when necessary use words". I wonder if he actually said that.
The heart of the problem with these liberal nuns and priests and brothers and lay persons, is that their works seem to spring from a desire to cover their lack of true faith. It is almost opposite of what most Protestants believe, that we are saved by faith alone. These people seem to think we are saved by works alone. The Church says we are saved by faith and works. Meaning our works flow out from our faith.
If they only realized that St. Catherine's and St. Francis' works were a direct result of their faith and they were loyal to the Church not rampant dissenters.
How long must we put up with them? One more generation should do the trick. Just like their contracepting secular counterparts, they are not reproducing, but the faithful habit wearing nuns are. The names of these two great saints will be restored once the voices of the dissenters are silenced by the grave.

I love St. Catherine also, she is such an inspiration! Thanks for another interesting post.

for vianney33: Amy Welborn wrote a blogpost back in July that provided links to sources debunking the provenance of a number of Catholic sayings including the SFA "quote" that causes the gastro-intestinal discomfort.

Since then, I've also come across the blogs or other articles of two (or more) religious sisters who are also comparing St. Catherine of Siena to the dissident and highly mislead (and misleading) Srs. Prejean and Chittister, among others

as to these two individuals, I'd repeat Borat's quip "I had no idea what that old man was talking about."

If you consider what atheists, protestants, and even some Catholics have done to our Lord's good name, is it any wonder they do the same to St. Catherine's good name?

it is only right that Our children who labor in this field according to Our commands should in union with the numerous Franciscan brotherhood call to mind and praise the works, the virtues, and the spirit of the Seraphic Patriarch. While doing this, they must reject that purely imaginary figure of the Saint conjured up by the defenders of modern error or by the followers of luxury and worldly comforts, and seek to bring Christians to the faithful imitation of the ideal of sanctity which he exemplified in himself and which he learned from the purity and simplicity of the doctrines of the Gospels.

Kevin, thanks for the link. It turns out that the closest quote to this by St. Francis has a much different meaning from what the kumbia crowd attributes to it. Basically to his brother religious, "get premission before you preach", and another line "preach with your deeds" where melded together to create the famous quote. Either way, it does not mean "don't tell me what the Bible says or what the Church teaches, that's judgemental just look at all the work I do for social justice".

St. Therese gets the same deal. People are always saying she wanted to be a priest. Um, yeah. Wanted to be a Crusader and die on the battlefield after wielding a sword for the Faith, too. :) The point of her vocational longings (of which there were a gazillion at the end of her life) was that she was made to feel them and then to realize that her real vocation was to love, which subsumed all vocations into itself. (The meta-vocation or ur-vocation, if you will.)

She wasn't sitting their planning out "My Career as a Priest", or fighting for women's ordination. There's no possible way to read that honestly into that long, long passage which is practically the climax of The Story of a Soul.

Thank you, Adoro, for your posts on St. Catherine of Siena. I intend now to read the Dialogues as soon as possible.