The Theory of Spiritual Insanity

It hit me late this week; why things have been so hellish and why they even started out so badly on Monday. (Which wasn't really the start but was the worst strike). 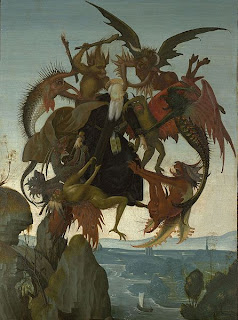 Every other year, all the diocesan priests head down to Rochester, MN, for a presbyteral council with the Bishops, leaving the care of the diocese in the hands of the religious community priests (Redemptorists, Franciscans, a few others), and a few retired priests who are able to help out.

This means that many parishes don't have Mass at all, because there simply aren't enough priests to go around. My own home parish usually has 3 Masses per day, but during this period of time, that is usually pared down to one or two, meaning many people can't attend as usual. We still have Adoration, and a few parishes may offer communion services (very very rare in this diocese so I'm not sure if any took place), but at my work parish...no Mass. All week.

Usually several of our Adult leaders attend Mass every day of our summer events, and when I'm there for that purpose, I try to attend, too.

This week, it wasn't an option, and the Church remained dark.

Yesterday, Father was back and I was able to slip into Mass just before it began. As I knelt down, a wave of relief flooded over me:  MASS! I sat behind one of our staunchest and most faithful volunteers, knowing she was praying for us and had been, but perhaps was a lone intercessor for most of the week.

We simply hadn't had any prayer support at all and on Monday, it culminated in a vicious spiritual attack, not just involving me, but involving my boss, her events, a youth minister she knew at another parish, one of my co-workers and her daughter - and the weirdness carried on all week long.

The awfulness of the things that happened this week to us seemed so out of left-field, leaving us all, individually, shocked, stunned, and thrown off for the remainder of the week. 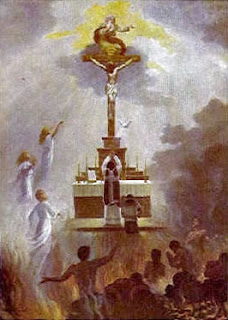 My theory is the serious deprivation of Grace normally provided by the several hundred Masses offered each day in the parishes of our Archdiocese, and the thousands of prayers people normally pray during those Masses never took place, for those people were not able to attend. I know, from what parishioners have told me, that during Mass they regularly pray for us and whatever is going on in our programs at the time.

We should have realized what was coming and asked for for our biggest prayer warriors to ramp it up in any way they could in lieu of the Masses they normally attended. But we didn't think of it.

I don't blame the priests or the Bishop for going outside the diocese; they are handling serious business which they need to be able to do without distraction. And many come back during the week if necessary for funerals, etc, but return to the council when the crisis is over.

That is the nature of evil; it flies under the radar, not quite reaching to crisis level requiring the return of the priest, but it reveals the power of the Mass and the prayers of the faithful during Mass to keep evil at bay.

I pray that what we suffered in our diocese this week was a sign of the holy fruitfulness of the priests' meeting in Rochester this week. 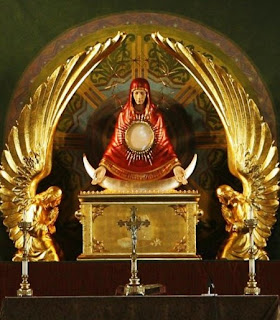 Would that all the people of God would pray and not just a few! Are we all on vacation? Or have we lost "Our First Love?"

Hey Adoro, where are the last 2 pics in this post from? I love them. Esspecially the mass/heaven one.

I have no idea. I know one is the Holy Sacrifice of the Mass freeing souls from Purgatory - you could maybe use that at a search term.

The 2nd is a monstrance in a church in Chicago.