Well, it's summer, like it or not, even here in the northlands.

Minnesota was hit with a pretty massive heatwave Monday and Tuesday, and by “massive” I mean that the heat here rivaled that of Hell. Or maybe Alabama. Our high temperature was 103, which, by the way, isn’t a record temp, although it doesn’t often reach 103 here. The last time I recall such high temperatures was about four or five years ago when it hit 100 or 101 on a late July afternoon.


In spite of the heat, though, people gotta eat. What to do? What to make that doesn’t actually involve applying heat?
Welcome back to my “Food I would Serve Jesus” series! Today I bring you a double feature in hopes of helping you to stay cool no matter how hot it gets!


So! Let’s get started with one of my summer fav's:
Gazpacho 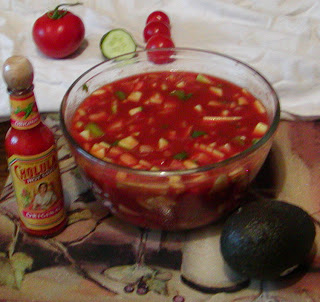 If you’re not familiar with it, Gazpacho is a cold, tomato-based vegetable soup, perfect for people who love the garden veggies abundantly available in summer months. The varieties in recipes for this are probably even greater in number than for Mole Poblano. As far as Gazpacho goes, though, although I've tried a few versions, I think the following recipe may be my favorite thus far.

Directions:
Combine chopped vegetables in large bowl, stir in V8 and Tomato juice, place in refrigerator to chill for at least a few hours. Serve cold, garnish with additional cilantro or basil (depending on which you used). Buen Provecho!

** NOTE: sometimes Gazpacho is served in restaurants in blended form. I find blending it to be a mistake; if you leave it “chunky” the individual flavors really “pop” and the soup is much more refreshing!

Directions:
Chop the vegetables and place in large bowl. Add mayo to coat – it should not be too thick. Hit the salad with a dash of red wine vinegar and a Tablespoon of lemon juice, maybe a bit less. Add spices to taste, cover and chill. Taste the salad after about an hour and adjust spices as needed. Should be ready to serve within 3 hours or less. (More time brings out flavors a bit more).

Options:
If you don’t have celery, substitute cucumber and then add Chinese 5 Spice, available in the grocery store spice section.

I’ve never tried it with celery and cucumber both, but believe it would be yummy!
Try adding salad shrimp for a little more seafood oomph!

Serve on crackers, spoon into a hotdog bun to offer as an East Coast Crab Roll, top a green salad, use as filling in cherry tomatoes as an appetizer – or just eat with a fork on a hot summer afternoon!

I give both of these dishes my highest rating: 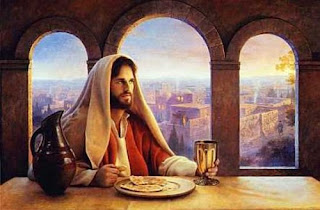 You would serve Jesus fake crab? :-)

Mike ~ If Jesus wanted real crab, He would provide it for me. A King does not visit the home of a pauper and expect the fare of a palace.

What He would expect is that I provide Him the best of what I can afford.

this weekend is supposed to be nicer...we'll see.

It DOES get warm, even hot here...although 100's usually not until July/ August.

Saw my first hummingbird this year tonight when I was getting the mail... now cooking up hummingbird food :) They will usually stick around until mid-September.

Something I would serve Jesus??? If He was here for breakfast I make really good bacon, eggs and blueberry waffles, with hot coffee and orange juice...if He was here for dinner then marinated chicken, baked beans and corn on the cob (in season) done on the grill...I love cooking on the grill :)

I'll try your recipes!! Looks yummy!! REAL crab is like impossible to find around here...so I would hve to try the fake crab..

Sara ~ I like the 50's and 60's! Seriously, I need to be a summer-bird and fly north into Canada for the summer!

We don't normally see 100's until July/August either, if we do at all. it's not a common thing. Upper 90's is normal and for days or weeks at a stretch. And we get tropical humidity. I thank God we didn't get high humidity on the day we hit 103 - for some reason, the humidity dropped when the temps went up, yet another oddity in our recent weather, and that kept massive storms at bay. Now it's low 60's I think.

I love it. Great sleeping weather, comfortable days, no AC needed. My ceiling fan is even off right now! Yay!

As for food to serve Jesus: I love cooking on the grill, too, and only charcoal will do for me! Corn on the cob, soaked and grilled in the husk over charcoal tastes like the sweet summer wind. *bliss*

If you click on the label below, that should show you all my recipes currently under that title. I also have a label for failed foods: "Food I would not serve Jesus". Might be in the tag cloud on my sidebar.

There are some surprises with the latter: for example, I found out that it is indeed possible to wreck my childhood staple favorite dish, made by Mom on a budget: tuna hotdish. Yup. Wrecked it. Shoulda killed it. Ate it anyway - at least for a day. Ugh.

Humiliated by a hotdish. *shaking head*

On your crab salad recipe--how large in ounces is your package of fake crab??? I can get the freshly faked stuff at my local grocery store in the meat counter and was wondering how much to get.

Thanks a bunch.. Sara

Sara ~ I have no idea. Just go to the seafood dept. and look at the packages there. I use whatever is available, whatever brand is available at any given store. Some packages are bigger than others, and if that's the case, I either use less of it or use a larger onion in the dip, or 2 smaller onions. There's no real "set" amount, really. If you tell the store what you want, they can probably figure it out for you as they probably know how big a regular package is of the stuff.

Now I'm wondering what's the best food to serve to Jesus. Though I'm pretty sure He will be happy whatever it is ;) Nice post. The Gazpacho looks yummy by the way :)