I wonder if we're at the beginning of another epic saga at Adoro's house, something akin to the Saga of the Breadcrust from a few years ago? (hint: I linked only to where that particular Saga began...not where it ended...)

As you know well, Epic Sagas at my house always involve critters, even when they seem to involve things.

This evening I had to work late, and as I arrived home, as usual I hit the remote to open the garage door. The door dutifully opened as I dutifully turned at a right angle so as to prepare to enter the one-car space. Being that it's fall, there are always leaves scuttering about due to the entrance of near air into the garage space, but tonight one of the "leaves" caught my eye.

It wasn't rolling about randomly, but seemed to have purpose...and legs...and a tail....


Oh my!
I watched it run about in a panic, then finally shoot between a card table and the garage wall. I got out of my car and approached the area. The tiny black mouse started to leave it's refuge, recognized my human presence and the awful bright lights of my car and immediately dove back for cover.

I live in a town home and wondered from whence this little intruder had come. In scanning my garage for garbage or anything that might look like a "tasty goody", I saw nothing, then wondered if the neighbors on either side had something to attract the thing. After all, our garages are adjoining. Cigarette smoke passes through my garage as if forced by a high-powered fan; clearly, mice can travel just as easily and often, and as mysteriously as smoke.

Because of an experience in the past involving my car and mice (when I was in Mexico for a semester a mouse made a nest of soybeans and other field material and blew out my engine. The car was never right from that point on. And I had mouse-nest material blowing through my car vents for the next few years, until I could get another car and finally trash that one.), I parked my car outside tonight. Besides, I didn't want the thing deciding to inspect my foot when I stepped out of the car!

Not that I'm afraid of mice; in principle, I'm really not. They're cute...but those are the mice bred to be pets. (I actually WANT a properly-bred pet mouse!) This one, though is a wild mouse and it isn't invited or welcome anywhere other than outside.

I came inside, disturbed, hoping the mouse has not breached the interior walls of my home. The thought is disturbing.  Having lived in a mouse-infested place for awhile, knowing what it's like to hear them scratching through the walls at night, let's just say I don't ever want to live in such a hovel ever again.

Mice multiply at an alarming rate, they carry fleas and disease, they eat through things that can be quite costly.

Where did this guy come from, though? I've lived here for 6 years now, and this is the FIRST mouse I've seen! How long has he been there?

I hate to say it, but I suspect my new neighbor. He hasn't lived there long, keeps to himself, and his garage is FULL of all sorts of stuff. He can't get his car in there at all and I'm not sure how he even walks through it! It's a perfect mouse-habitat, especially if that stuff was in storage before his moving here (which I suspect but won't go into detail as to why that is my suspicion.).

OK, so...it doesn't matter. What DOES matter is that I have a new uninvited guest. And he is most definitely NOT staying! There are no vacancies available for him! (The neighbor is fine; he can stay. But his suspected infestation is NOT part of his lease, I guarantee it!)

Tomorrow I plan to head to a store...somewhere...to find something to send Mr. Mousie to the big Cirque du Mousie in the sky. And maybe the rest of his family would prefer to go with him...?

The neighbor on my other side has a cat...is she [the CAT!] a mouser? I must inquire about that, and if so, let her [the cat!] go to work while keeping my dog well contained in the house.  Natural means are, after all, the best!


Speaking of the dog.....she's a born hunter, being a German Shepherd and all!
Acting on a hunch, I brought my dog into my car-less garage and ordered her to "Find the mouse! Where's the mouse!?"

And wouldn't you know it, but that dog put her nose down, made a beeline for where I'd last seen that little bugger, looked at me, put her nose back down and made a beeline to the other side of the garage, and given her intensity, I almost expected to hear a mousie-squeak!

Instead she continued to sniff intensely, ran her nose up the wall in that corner, then back down to the corner, focusing her "investigation".

One does not need to be an expert to realize that my dog, indeed, has found the scent and the mouse himself, perhaps.

That tells me where to put the trap.

Sadly, though, it confirms what I believe: that the mouse came from my new neighbor, and that tells me there are likely more. I will have to be very aggressive in my initial breach of their nest to ensure they do not continue to reproduce.

Yes, I love animals, and this very evening I gave a short talk on Stewardship of Creation, part of Catholic Social Teaching.

We have to recall that good stewardship involves controlling animal infestations. The mouse population in the world is not in danger, and in fact, given the harm they do, I have no qualms about killing them. No, I am not going to use a "humane trap."  I am going to wipe out the mouse family. I'm sorry if you're offended by my position but it is not contrary to Catholic teaching in any way shape, or form. I reserve the right to defend my home from vermin in the way I see fit, and according to all applicable laws, religious and secular.

Had the mouse not breached my own property, he and his progeny would be safe. If I lived on a farm, maybe they'd be relocated, maybe not.  I don't know: I live in the city and in the city, mice are just plain dangerous and destructive.

But this mouse is NOT going to infest my home with its filth. Nor is it going to spread to my other neighbor. We live in very close quarters here, and something like this could all too easily get out of control. 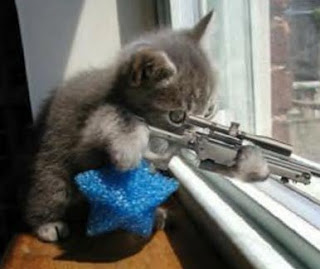 Get some peppermint oil (the real thing) and soak some cotton balls and toss them about the garage. No mice - instantly.

Another MN friend did it in her basement and her garage. Worked to perfection.

And given the fact only a thin and hollow & hol-ey wall separates me from the infestation next door...what would keep them away?

Great pic. Given the choice, I'm sure any cat would prefer a high-powered rifle.