I've got a few things to report, so will start maybe with Kibbles:

The other day I was sent a link from Mike Thomas from BlogInterviewer.com stating that I had been recommended for an interview.  After perusing their site, I see that they are a sort of clearinghouse established to profile blogs of all sorts. I don't know who recommended me, but after taking a look at their interview form, I decided to go ahead and submit my answers. After all, haven't I stated that we Christians need to maintain a web presence?  This isn't like a press interview where they are seeking to railroad you and take your comments out of context in order to fit their bias.

My Interview, Mr. Thomas informed me, has been posted and can be found here.

On a humorous note, It shows my last name as "aka".  My last name ISN'T "aka" but I am certain to start getting email addressed to me with that name, and may even adopt it as a pen name in the future!  It seems the interview form has limits and "aka 'Adoro'" was cut off. That's ok. I'll run with it.  :-)   In any case, it's a pretty straightforward site with all the simplicity of what it promises to be, and from what I can ascertain, people vote on blogs and based on the votes, one is chosen as the blog of the month.  I see that there are a couple other Catholic bloggers included, and I am familiar with both. (No I won't link to them as I expect you'll check them out NOW by clicking on the link!)

With that said, nice to "see" you Brother Vito and Paul!

OK, now, moving on to Bits:

Because my Foster Dog "Bear" has an adoring public, I find it necessary to continue to update on his progress.

He's as sweet as ever and has taken, like my dog, to carrying around a "happy toy" of some sort. Currently it is a little white teddy bear I once got from a boyfriend who made the mistake of treating me badly.  It's face is gone now and it's a dirty mess.  Bear always wants to take it outside so I have to remind him that it's an "indoor toy" and take it away. 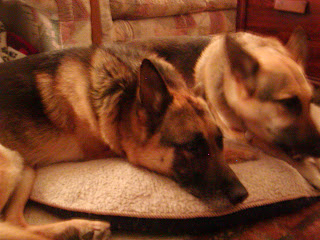 He is a loyal friend, given to attention-seeking behavior such that I actually had to decrease his food intake for a couple days as he refused to eat if I wasn't standing at his head.  Refusing to play THAT game, once I recognized he was refusing his food, I took it away, then cut him short.  Very quickly he remembered what hunger was like and I'm happy to report that he has decided to eat without my constant attention, and without having to resort to weight loss. (Friends of mine who had similar behavioral problems with their dogs tell me that their own had to lose a couple pounds before they finally came around!).

So it seems that "Bear" is beyond the honeymoon stage and is now testing me. So far:  Adoro 1, Bear 0.

In all honesty, as I look around my house which is even more so all sorts of furry, and I look to the sloppy outdoors, and I consider how easy life was with only one dog (mind you I don't have a fenced yard...every trip outside to go potty is a production and an endeavor), ...I can't WAIT to have only one dog again.  Two dogs are too much for me, too much for my house, and I fear, too much for my yard. I'm going to have to pay for fertilizer and grass seed in the spring, methinks, although I've started giving them tomato juice with their food.

I am reminded of the old Jewish folk tale of the man who went to the Rabbi to complain about the noisiness of his family and their overcrowded quarters. The wise Rabbi tells him upon each visit to add this or that animal to their household. In humility the man does as directed, thinking the Rabbi crazy and himself crazier for doing as told. Finally he has had enough and goes to the Rabbi, the Rabbi tells him to put all the animals where they belong. The man comes back the following week with a glowing report on the angelic and wonderful condition of his family and quarters.

I identified with that tale after Fire died, and I am reminded of it now as I house Bear.  Of course, he doesn't compare to the chaos of a donkey and a duck and a chicken and a goat, but still...even one extra animal in a space not built to contain it....

I further realize how ill equipped I am for this dog. He needs space to run around, and I can't give him that. I don't have a fenced yard, and really, the dog park near me gets so muddy that it's impractical to bring him there. In all this melting, I can't even let him run off leash in my yard, for he favors tearing through the puddles at the low point.  I can't bathe him here.

I do truly hope someone adopts him soon, not just for his benefit (for he really needs to find his forever home!)  but, selfishly, for my benefit, too. I have come to realize that having him here is part of my Lenten penance and alms, for with him I can't afford to give in any other way. I am very worried that I'll have to figure out how to pay for Frontline and Heartguard this spring, when I can barely afford it for my own dog, and I don't think those are covered by the Rescue organization.

But God provides, it's a good experience to have Bear here with us, and I know that what I am doing to work with him prepares him perfectly for the rest of his life, and I'm happy to be a part of that.  It all glorifies God in the end.
Posted by Adoro at Monday, March 01, 2010

I'm glad to hear Bear is doing well! Yes, they know how to pull our strings, it's a good thing you're one jump ahead of him. I know what you mean about the health expenses; we just had a $95 vet bill this past week. I didn't know cats got allergic dermatitis. I thought it was ringworm, glad it's not that. Still don't know what caused it, but the shots they gave Beau have helped. As I speak (write?) he is on my craft table messing with things he shouldn't, I'll have to put it all away.
Bear's new family is out there somewhere; I'll keep praying that they come forward.

P.S. That picture is so cute! Someone will surely see it and not be able to resist.

Adoro, you and your love of Bear is so heart-warming. I am an animal lover, as you know, from way back, from my own animals to handling and loving zoo animals. I was so sorry that I could not cuddle our Komodo dragons on loan to us for a few months last summer. I would like to help you pay for the flea and heartworm medications that Bear needs. Perhaps several of us could pitch in and provide this. You are such a wonderful foster mother and Bear is one beautiful doggie thanks to you,your patience and your love. Let us know how we can help with costs, baths, etc.

Charlene ~ Thanks. If it comes down to it, maybe that will be a solution. For now, it's still winter, something might still happen, and a co-worker recommended a site that sells natural stuff that is a LOT cheaper than Frontline.

Do you know about garlic supplements? I might at least try it with Bear, my friend uses these supplements and has never had a problem with fleas or heartworms. I think it's:

Looks affordable, and maybe is a good option. But I've ALSO been told garlic is bad for dogs, as it is part of the onion family and we know that onions are outright poisonous to dogs.

Just want to do the right things for BOTH of them!

Adoro, when I worked in Swaziland I had two dogs - a German Shepherd and a Doberman. Fleas were a terrible problem. The local veterinarian told me to get yeast tablets and give to the dogs to keep fleas away. It worked. I had my mother send bottles and bottles of yeast tablets and I gave each dog 4 or 5 tablets a day. They ate them like candy - loved them! It worked.I didn't have to mix with their food. I just held them in my hand and they lapped them up. The result was no fleas or tics. I didn't know about heartworm then.
Please keep my offer in mind and don't hesitate to let me know if/when you want to accept it. Thank you for what you are doing for Bear!