I'm Gonna Make You an Offer You Can't Refuse 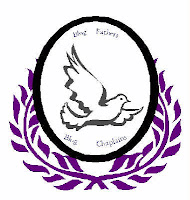 They're ordained. They are busy with their own "children" and often overwhelmed with their respective areas of responsibility, but somewhere in all of that, they started blogs.

There are a TON of Catholic bloggers out there, and even MORE Catholic readers, faithful people, questioning people, Christians and non-Christians from all corners of the world, all somehow landing on Catholic blogs. And sooner or later, they'll find a blogging priest. There's a lot of blogging priests, too, and several I read.

But there are TWO in particular I follow most closely, and I know they follow my blog as well. And over the last year or so, they've both become friends, they've both given me snippets of advice here or there, and they've both made some pretty profound statements on their own blogs.

Recently I was joking with one of these Fathers, suggesting he was my blog chaplain. As soon as I sent those words in an email, I realized they were true, and there's an entire world of Catholics out there who may also claim these priests as "chaplains."

When I first began blogging, it opened up a world of Catholicism that is hidden from daily life, and I saw how important it is for us to maintain a web presence. Clearly, many priests and religious also see the value of the use of technology in this culture, and the resultant connections with Catholics from the local area spreading around the world really displays the universality of the Church.

The priests who blog have opened a door, one they likely never imagined was there, even as they turned the knob and pushed it open. That doorway takes them beyond the real-world parish or position they hold, and expands their ministry into cyberspace; they are Fathers of a cyber-parish that has no name, and because of their willingness to reach out, they have spiritual children they have never met.

Just as the people they see every day call them "Father", so do we, their readers, for they are Fathers to us as well.

And, I have to say, they've become Chaplains of a sort, and so I turned an idea over in my mind, sensing a need to recognize what they do and the importance to all of us. When I first began exchanging emails with one of these priests, I felt very guilty; he was faithful in responses and I feared I was being a pest, taking time away from those he was called to serve. Yet, ever gracious, a few simple questions or comments has turned into a friendship. The other priest was also gracious in his comments and various emails, even becoming a resource of sorts for me when I started a new position in a church. From hobby and random comments to...professional networking and real friendship.

The priest is not his own..although, typically, they remain in their assigned diocese, shepherding their flocks, each of which becomes family. The blogging priests, though, help us to realize that everywhere we as Catholics go, we have Shepherds, we have Fathers, and we have a home. Each and every priest is a Father to us all, even if we don't live in their diocese and regularly attend their parish. We could travel to Jerusalem, Minsk, Ocotlan, and still know that we have somewhere to go and we will be embraced as the spiritual children...and in turn, we will embrace these priests as our own Fathers.

The point is this; a priest's parish is not his only parish. His ministry goes far beyond, and, when they enter into cyberspace, they are also embracing the universality of the Church, giving a special fiat as they recognize that their parishioners are not limited to the walls of their specific assignment.

It is with great honor that I finally bring this post to its point: in trying to figure out how to honor those priests I've adopted as "my own" and in recognition that I've likewise been adopted by them, we've developed a new title. This is NOT a Meme. This is not a Blog Award. It is a Title, one given both in fun and all seriousness all at once, and one that will remain as a special gift to two priests I greatly respect and am proud to call "friends".

They are... the Blog Fathers. 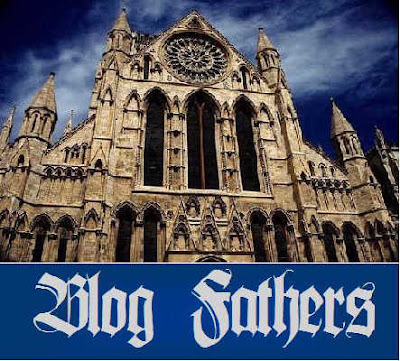 I, in speaking also on behalf of Lillian Marie and Uncle Jim, as well as other bloggers and readers, known and unknown, give this Title and Honor to two very special priests, in no particular order:

Father Schnippel of Called by Name

For first saying "YES" to God, for providing us with an example of holiness through the use of blogging, for adopting us as your own "families", for your humor, your faithfulness to Christ and for walking on the proverbial water to bring the Gospel to those who need encouragement and those who have never met Christ. We definitely see Him in you.

Lillian-Marie ("Icon-ographer")
Uncle Jim
Adoro
...and countless others who also call you "Father". You are Chaplains in a non-traditional sense, but Chaplains just the same. Thank you, Fathers.

You have won the right to post the icon on your blogs and we hope you'll do so with pride!

God bless you and see you soon!

LOL....do you still WANT to, Blogfather?

Great concept, Adoro. And I sure could use that artwork for my sidebar!

Very nice idea! That would go over well here in New Jersey!

I really like the blog "What does that Prayer Really Say" by Fr J. Zuhlsdorf.