A Reflection of God; Learning How to Love

Needless to say, I've been musing a lot about my last years in my hometown in the last couple days. Remember my post from Friday night, wherein I was lamenting that I'd never seen a reflection of God through marriage?

My parents divorced when I was eight, and I still remember pulling the covers over my head while Mom and Dad argued in the kitchen on the other side of the house. I don't have a lot of memories of their marriage. My brother and I both had the burden of explaining to our friends the definition of "divorce" because it seemed our parents were the first to experience the event. And in the process, I still remember being a pawn.

Where is the reflection of God in that?

Fast forward several years, and to a different state. I met my best friend at the youth group our parish was trying to form. They were using music and fun, and when we were done rehearsing, she and I sat on the steps in front of the church, giggling as though we'd already been friends forever. It was a cloudy winter Sunday afternoon and she invited me to go ice skating with her. So we walked to my house, only a block away from the church, so she could meet my Mom and we could get permission for me to go. My new friend called her mother from there to come pick us up. I grabbed my inherited antique figure skates and a few minutes later, we were climbing into their van. 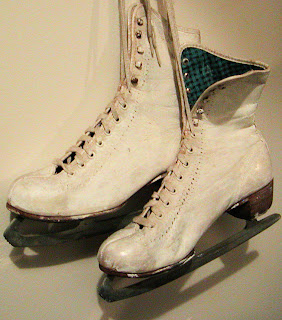 My friend lived a block from an ice rink, so it wasn't long before we were doing pirouettes and awkward spins, and making up olympic-style routines. Before long we tired and headed back to her house. En route, I slipped on the ice while crossing a busy road, somehow managing to get up and out of the wayof an oncoming pickup in the nick of time, nursing a bruised hip while I tried to catch up with my friend. (Who was doubled-over laughing as she hurried ahead, by the way!)  It was an afternoon of non-stop laughter.

As soon as we entered their warm house, I learned that Sundays were "pizza night", and her Dad was making pizza as usual. My Mom gave me permission to stay for dinner, which was delicious. Her family made me feel very much at home, and I was told that the only proper response to the chef was to say, "It was the best pizza I ever ate!"

This I dutifully accomplished. And this sealed the deal; forever after, I would be welcome in their home. Because my friend's Dad said so.

I don't think he realized what he was getting himself into.

I've written of this before, but there's more to the story, as one could guess. It was not long after, maybe a month or more, that I spent a Saturday night there. Our friendship had deepened, the way teenage friendships do, and it was the first time I was to stay over at her house.

It was a last-minute decision, as my friend and I had gone to Mass that evening and decided at that time that we didn't want to separate that night. Our fun should continue! When I got home, though, I knew something was wrong...Mom had big eyes and had apparently ordered a pizza. But she gave permission for me to go to my friend's home. And to this day, I feel guilty because she seemed stricken by the fact that I was leaving her to spend time with my friend.

My friend's Mom again picked us up at my house and drove us home. That night I slept on the floor in my friend's room. Sometime around six or six-thirty A.M., there was a pounding on the front door. My friend's dad got up to answer it, and my friend poked her head out, curious. She came back to get me...my Mom was there.

My friend's dad told me that apparently someone was looking for me, according to my Mom, and that I should go talk to her. We went into the basement (a finished basement where we could have privacy), and I saw that Mom's eyes were even bigger than they had been the night before.

With a note of desperation, she explained very earnestly to me that the night prior, the pizza she'd ordered had been delivered in an ambulance. The person with the pizza had continually looked past her as if looking for someone else, and she "realized" they'd been looking for me. She said further that this was happening because she was a terrible mother and I'd been raped; that's the only reason they would have been there.

What a shock this all was to me! I explained to mom that the pizza had NOT been delivered in an ambulance, although conceivably the driver maybe had a van. Or a truck. And that the driver was not looking for me. And that I had not been raped.

But of course, my Mom, fully in the grips of full-blown paranoia, wanted to check.

Um....no. Not necessary. I figured that I would KNOW if I'd suffered that kind of trauma.

We went back upstairs...I think I declared the conversation over, because I didn't know what else to do. She must have told my friend's Dad, and then her Mom, what was going on before she and I spoke, as they were both waiting in the living room for us. Her parents told my friend and I to go to her room, and in the meantime, they spoke to my Mom, and convinced her to go to the hospital. She argued. They discussed, and in the end, she went.

I was told that morning that I was going to be spending some time at their house, and they'd take me home to get some more clothing and whatever I needed for school. My new "Mom" picked me up every day after school, unless I walked, and that following weekend, we went shopping in the Cities (what we called the Twin Cities), where she bought me my first pair of designer jeans.

Of course, as a trade off, I also had to help with chores around the house. No problem.

For years, I've always wondered how they were able to put up with the two of us...two giggling teenage girls. I was the quieter one, she was the wild one pushing all the boundaries, and we balanced each other out. And in the process, drove her family nuts!

I asked my long-lost "Dad" on Saturday how they had managed to put up with us through such years. He told me, "You two taught us how to love."

He explained that until only recently, he and his wife, my second "Mom" really hadn't understood marriage, really didn't know how to love each other. And he apologized to me for not being able to show me a reflection of God's love in a marriage.

But there's a problem with that....they DID!

Until Saturday, strangely, I never considered what they really sacrificed. There they were, going about their lives when suddenly a teenager was dropped into their laps, and boy, did they realize that girl's mother was SICK! And they acted with compassion both towards her and towards that girl, taking her into their own home.

For weeks. Consider that scenario...what would YOU do?

They could have called my relatives, and I think we discussed it. But they lived close to the school, I couldn't drive yet (it would be years) and they felt it was best for me to stay with them, if it was OK with everyone. My Mom had given her approval with that, and we made sure my closest relatives knew where I was.

God bless them, they never tried to ditch me, as much as an inconvenience I must have been to them. They always made me feel welcome in their home, and really became my second family. From that point on, I knew I had somewhere to go, and for the next several years, their home became my refuge. If I showed up on their doorstep, they just handed me a key and told me to remember to lock the door when I left to go to school in the morning.

That saved my life.

He told me that we taught them how to love; I argue that they taught me about sacrificial love while offering me a reflection of God. I didn't see their marriage problems; I saw people who were willing to treat me as their own.

I've often wondered why I'm not more messed up than I am, and now I know the answer: Because at that important time in my life when all was in an upheaval, I still had a family, I had a stable home, and I had two surrogate parents who sacrificed their own preferences on behalf of a teen from a troubled home.  Me.

Wow. What a couple. Treasures.

As you say, "I can't see anything other than God in that." Wonderful people!
This story and the previous post are also an insight into understanding some situations better. One of my sisters had a friend who had a messed-up home life, during their teens. My parents' household was her home-away-from-home, when things would get too chaotic where she lived. Eventually her grandmother gained custody, which was a good thing. In later years, my sister has lost contact with her. We did hear that there had been a failed marriage, and a career change. Maybe there is some shame, and a sense that we would think less of her. But everyone has setbacks and heartbreaks; life isn't a straight line going up the hill, for anybody.
It's wonderful when things come full-circle again.

Adoro, you are blessed. The Lord has always kept His hand on you. And your mom.

Great story about what Burke called "the unbought grace of life."

Sometimes we can't see all our blessings, and sometimes we forget them. But they keep blessing us even when we forget, and they don't have to be perfect to do so.

You know that scene in The Great Divorce, where all heaven in celebrating a great saint? Picturing that, for these people, someday...