After a Long Absence/ On A Path Finally Taken

These beauteous forms, Through a long absence, have not been to me As is a landscape to a blind man's eye: But oft, in lonely rooms, and 'mid the din Of towns and cities, I have owed to them In hours of weariness, sensations sweet, Felt in the blood, and felt along the heart; And passing even into my purer mind, With tranquil restoration:--feelings too  Of unremembered pleasure: such, perhaps, As have no slight or trivial influence On that best portion of a good man's life, His little, nameless, unremembered, acts Of kindness and of love. Nor less, I trust, To them I may have owed another gift, Of aspect more sublime; that blessed mood, In which the burthen of the mystery, In which the heavy and the weary weight Of all this unintelligible world,  Is lightened:--that serene and blessed mood, In which the affections gently lead us on,

I apologize for the long absence, but in life things change, and it's entirely possible this blog has come to an end. It has been a labor of love, a labor of defiance at times, and, for long time readers, an obvious catharsis. It is perhaps because of this blog and time away in prayer and reflection that has helped to open another door in my life.

As an update, at this time I am not considering religious life, and believe that door to be closed. I fully believe Our Lord called me to deeply discern that Call, but in the end, He desired only that I say yes, and be willing, even though He has not allowed my own response to be possible. Although I am saddened in some ways, in others I realize it simply means He calls me on to other adventures, and this is glorious for God always knows where our true happiness lies. It means I continue on, the pilgrim that I am, perhaps now going into "special ops" mode in the spiritual sense of the word. By this I do not imply extreme holiness (since I have no where near achieved it), only, rather, deeper adventure, deeper mission, more covert and hidden operations in my heart and soul than can be shared with the great unknown ocean that makes up the internet world.

In this time of absence here, though, I have been working. It was as if a dam broke, and after a couple years of no interest in writing, I have, in just the last couple months, written one book and am half-way through the sequel, perhaps of a trilogy.

A couple months ago while doing some "nothing" reading, suddenly an old idea clicked in my mind and the story and characters have come to life. I have a couple dear friends who are  helping me with this project, providing support and even professional editing assistance, connecting me with resources (including people to interview) for research purposes, and even more amazingly, God has connected me with a very holy priest who also writes fiction (so far unpublished as he has not sought it yet), who has become the kind of friend every Catholic writer needs.

Just today I spoke with him about story development, and he commented on the recently deceased author Vincent Flynn (Rest in Peace) who was a faithful Catholic who lived what he believed. He noted that Flynn allowed the characters to have "free will", and this is a mark in Catholic writing. Writing is of course an art, and as Catholics, if we are faithful, if we allow God to work through us, even in works that are not religious in nature, our faith shines through.

The books I am writing are not "Catholic" in the religious sense. They are simply stories about people, they are adventure, thriller, action, and romance. They are merely human drama....yet, is there anything "mere" about the drama in the average human life? I'm not speaking here of emotional angst, but some of the deepest yearnings of the human soul, which often play out in ways that seem superficial.

This is why we have fiction. Our very souls are laid out nakedly in fiction; it's why we are drawn to it, identify with characters that do not exist, and engage with a story that never happened. One theologian, I believe it was Fr. Thomas Dubay, once observed that our engagement with a story in which that story comes to life in our imaginations, bringing us directly into it, is actually like a state of contemplative prayer. It is NOT the same thing, but it reveals our ability to engage all of our senses and abilities; and if we can do that with mere fiction, it also indicates we can do so even more deeply, more completely, in communion with God.  I would suggest, therefore, that reading good fiction may very well be a preparation for prayer and help us engage more deeply; that is, if we read the right things.

Getting back to the main point of this post, I haven't been writing a religious work, yet I found, when I completed the first draft, that Catholic themes are present. I cannot write what I do not believe. I can create characters who don't share my beliefs, and I can establish themes and content, but in the end, who I am as a Catholic is still imprinted upon the characters and within the story. Themes of sin, of redemption, forgiveness, sacrifice and eternal union arise in ways that are perhaps unexpected.

In writing seriously, I have found that my characters do truly have "free will", for they don't match what I want them to do, but seem to have minds of their own. Characters I'd like to see go down one path, in an interaction with another character choose a different one...and somehow, details emerge about the importance of the deviation from what I, the author want.

I have found, thanks to brief conversations with my priest friend, that I now have the ability to go back in this work of revision, looking with different eyes at where the free will of the characters emerge, for none of them are clones of me. They don't act as I do, they don't respond as I do. Nor do I want them to do so.

My friend today pointed out that this act of writing is an act of co-creation with God, in allowing the characters to develop, to become who they are and not necessarily what I originally envisioned them to be. It is humbling to think of it in those terms, yet his comments hearken back to the philosophy of St. Thomas Aquinas, revealing the proof of God's existence as the First Mover. A painting points to an artist, and the brush held by the artist, and in any given creation, God is that artist. A book points to the pen and the author, but then, who created the author?

Any truth points to God, if it is really true.

Whether or not my book will be published, I can't say. Although the first draft of the first book is complete, and I've done a read-through and minor correction with the second draft (typos, minor things), the third draft is in deep progress and will take time and additional research as I await one of my  important contacts to come back into the country to be available to assist with special-ops information. (non-classified) ;-)

It's amazing how many people I've already had to involve in just writing the first draft, and now I understand the litany of thanks given in any published book, for no author acts alone or anonymously.

So with that, dear readers, I thank you for the prayers and sacrifices you have offered me over the last several years, and beg for more in this new endeavor (and always for my Vocation, whatever it may be as I enter middle age).

It's entirely possible this blog is not at an end, however, I likely won't be writing much here any more. I can say that perhaps there will be other updates and other actions of God that prompt me to add another post, but maybe the "Tales of Adoro" are largely at an end since the original purpose of this blog has fallen into oblivion.

Thank you for coming with me on this journey, and, God willing, it will continue albeit in a direction I never really expected.

God bless you all, and thank you. From the bottom of my heart and the core of my soul, thank you. 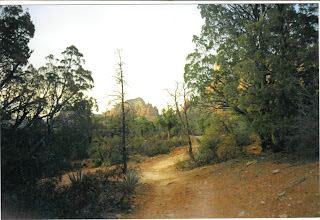 TWO roads diverged in a yellow wood, And sorry I could not travel both And be one traveler, long I stood And looked down one as far as I could To where it bent in the undergrowth; Then took the other, as just as fair, And having perhaps the better claim, Because it was grassy and wanted wear; Though as for that the passing there Had worn them really about the same, And both that morning equally lay In leaves no step had trodden black. Oh, I kept the first for another day! Yet knowing how way leads on to way, I doubted if I should ever come back. I shall be telling this with a sigh Somewhere ages and ages hence: Two roads diverged in a wood, and I— I took the one less traveled by, And that has made all the difference.
~ "The Road Not Taken", Robert Frost

Thanks for all the updates. Prayers assured as these graces continue to unfold!

Good luck and continued prayers for wherever your life's path takes you. I have always loved that Robert Frost poem, it fits so much of life.

continued prayers for you, God bless