I used to wonder how I'd react if I was ever bitten by a dog. Would I be angry? Furious? Demand the death of the animal? Be fearful? Just of the dog or all dogs? Freak out completely?

As it turns out, none of those things. Inside of the shock of the experience, there was only a deep, terrible sadness. Even as I staunched the blood, I knew my wound would heal but for the dog...it was fatal action.

A couple months ago I wrote about my foster "Aslan", named for his mane of fur. I wrote of his aggression and the fact I was going to work with him and with the behaviorist's recommendations. For the last month or so, that's what I've been doing. And Aslan had been doing well...or so I thought.

I noticed other forms of aggression I suspected might also be Retriever-snottiness, testing me, and because I wasn't sure which behavior was aggressive, if I was tripping a trigger, I actually asked last week if he could be moved to a foster home with more experience with aggressive dogs. Maybe someone who could perhaps reach through and have success with him.

But it wasn't to be. On Tuesday night, while I was brushing him, Aslan turned and bit me. No warning. I wasn't touching his nails. I wasn't trying to muzzle him. I wasn't doing anything to trip his trigger. He just decided to bite and followed through on the impulse.

I could feel his teeth puncturing my flesh - there was an actual sensation of it, followed by the white-hot pain, and hot on the heels of that...the shock. And then the emotion - I knew in that very moment that it was a death sentence for him. I stood there, hand over the wound, knowing that as he laid there, ears flat out to the side, teeth bared, that it was over.

I was shaking a bit, and already crying, my breath rasping in my throat. I forced myself to calm down and do what clearly needed to be done. I went into the kitchen, grabbed a paper towel to soak up the blood, got a look at it, and took some photos of the bite - pretty hard to do but managed to get a few. (I did this partially to document, partially to, at some point, get an objective look at it later.) After that I washed the wound with soap and hot water - gently. And sprayed the hell out of it with Bactine. At some point I managed to wander into the bathroom and grab my old Ski Patrol pack with all my First Aid supplies, pull out some sterile pads and tape and patch myself up. I had to use a bandanna for a bit of a pressure dressing.


Doing this forced me to focus for a while, clear my head (well, as much as one can clear one's head when one is bleeding), and think about how best to proceed.
I called Aslan's adoption representative to let her know of the incident and asked her to call me in the morning. She called back immediately, and we discussed what would happen in all likelihood. I said that I wasn't angry and it was the truth; I wasn't. But I also was very clear in that I felt Aslan could not be adopted. He was too unpredictable - he would really hurt someone. I stood there bleeding, knowing the consequences of every possible course of action. None of them good.

And I was crying, and I was upset, and dang it, that bite HURT!

And then I had to act as calmly and normally as possible, for I don't have a fenced yard. I had to take the dogs out to do some business. It went fine.

Wednesday morning, when I awoke and changed the bandage, I realized I had to go to the doctor. No avoiding it - I needed a tetanus shot and likely a round of antibiotics. Although had I gone in immediately there probably would have been a couple stitches, as I waited until the next day it was too late for that.


Later that day Aslan's representative called me. His case had been discussed at length and sentence had been passed. He had to be euthanized.
I knew that would be the verdict and yes, I agreed. Not out of anger, but out of realization that he was too unpredictable to be adopted. When a trigger can't be isolated, when every little thing becomes the trigger...that can't be helped. It can't be trained out of the dog. He made his decision, his terrible, terrible decision.

Unfortunately, it couldn't happen immediately. I had to wait and so my heart has been heavy and I've been weeping off and on for the last two days. Even amidst the stress of my professional life, I've had to push back the tears and profound sadness. At home I was on egg shells, careful not to make eye contact with the dog, careful not to trip on him or set him off. He was clearly also on "different" behavior, always watching me with a wary eye. Not baleful, just wary, as if waiting for a counter-attack.

Tonight I spoiled him with his last leisurely walks, hotdogs with his food, no longer concerned with his weight.

I drove to the vet clinic and played the song I always sang to him, "Little Red Riding Hood", realizing this big bad wolf had shown all his cards. All I could think about was the old folk tale about the snake who said to his savior, "You knew what I was when you picked me up."

Yes, I did. On some level, I did, and then after seeing him in action, yes, I knew. But I kept him anyway, hoping things could be different for him.

Tonight we said goodbye to my foster and I remained with him. I sat with him, I petted him, I forgave him. This evening before leaving home I actually looked into his big hopeful brown eyes and told him I forgave him. I apologized, too, for whatever I did to make him bite me. I apologized for what we were about to do.

It didn't matter to Aslan that I forgave him. He didn't know the difference, but I do. I knew I could not be in that room with him as he was put to sleep if I was angry. He had experienced far too much of human anger in his short life, and for me, I knew anger would only do more damage to my very soul. In truth I forgave him almost immediately, but I had to speak it. I had to say it out loud while looking into his eyes.

And I prayed, too. I offered him back to God, Aslan's creator and my own. I know that even though animals do not have immortal souls, God cares about them. He has shown me that over and over again. [Note: please don't try to argue this point in the combox. I'm not in the mood and you won't get anywhere. Just let it go]

One of the things I resolved about about fostering animals is that, if they are in rough shape in some way, they will leave my hands in better condition than that which they arrived into my care. In some ways, Aslan was better. He'd lost weight, had more energy, was far happier than when he had first come to me. He wasn't in pain all the time. He showed me his best side, I think, in his clownishness and in his clear desire just to be a normal dog.

Oh, the tales I could tell!

As this was not a happy ending, though, I'm not sure if I can claim that kind of success with this particular dog. He didn't leave my hands better off. Healthier, but...no longer living. Yes, it was the decision that had to be made, but I hardly call this a successful foster experience. I think the best I can say is that I tried, we all tried, and even in its imperfection, the last several weeks of Aslan's life were probably better than they had been before.

We'll never know, though. We can only guess. 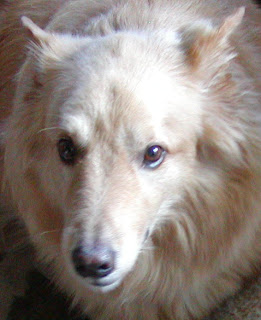 Dammit, Aslan, you big fat  stupid butterball of fluff with teeth, I loved you and I miss you! Rest in peace, my friend. You will never ever have to be afraid ever again.
Posted by Adoro at Thursday, June 07, 2012

I will say an extra prayer for you tonight. I hope T is doing ok as well.

I can only think of the words of Mother Teresa when I hear your story. We are not called to be successful, only to be Faithful. You were indeed Faithful to Aslan and through your efforts and forgiveness, also Faithful to his Creator. And yours. While *I* do believe Aslan will be waiting for you on the other side to thank you one day,(No argument intended.). I think we can both agree that the Almighty will not forget your efforts and charity towards His lesser creatures. May God comfort you and Bless you, Adoro.

Thank you for sharing this story with us. I am sorry for your loss. Your writing is so clean, fresh and raw. I really enjoy it.

Tears are in my eyes as I type this. I'm sorry for this sad experience.

This is sad. I thought of you last night watching "Dogs In the City" with dog trainer Justin Silver. You might like the show if you get a chance to see it - every Wednesday.