Man in Relation to the Angels

Hello, friends, long time no see!  Tonight I am answering a couple questions the very patient Jose' asked me MONTHS ago!

Here is his question:

The question is on the Angels and where we stand in relation to them in the "Great Hierarchy".


When I speak to most Protestants I find that they believe that it is man's destiny to surpass Angels and stand nearer to God than they. Essentially, that Angels are closer to God FOR NOW because of man's fallen nature, but that man was once closer to God than Angels in the time of Adam and Eve, and that humans shall be raised higher than Angels once again one day. Man, as God originally made him, is higher than the Angels.


Yet, as I watch EWTN I often find individual Theologian's often putting Angels closer to God than man, by nature. In Psalm 8 we find a line that says "Only a Little lower than the Angels you made us", and that to me sort of sealed the deal in favor of Angels, by nature, being closer to God. Recently, though, I have found that not all translators say the same in that Psalm. Some Translators actually say the PSalmist writes "Only a little lower than GOD you made us." ...That tips the scale in favor of my Protestant friends' belief that MAN has the higher nature, fallen as it currently is. What do you think? 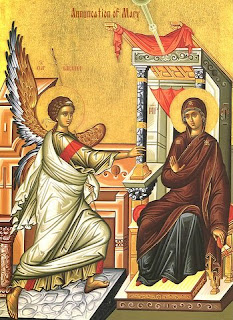 To answer it I looked not only to Sacred Scripture, but also to the Angelic Doctor, St. Thomas Aquinas who, of course, is far wiser than I am!

First, to Scripture. I went to my  1966 Jerusalem Bible and inquired there first, with the passage in question:  Psalm 8:5.

YHWH, our Lord,
how great your name throughout the earth!
Above the heavens is your majesty chanted
by the mouths of children, babes in arms.
You set your stronghold firm against your foes
to subdue enemies and rebels.
I look up at your heavens, made by your fingers,
at the moon and stars you set in place -
ah, what is man that you should spare a thought for him,
the son of man that you should care for him?
Yet you have made him little less than a god,
you have crowned him with glory and splendour
made him lord over the work of your hands,
set all things under his feet,
sheep and oxen, all these
yes, wild animals too,
birds in the air, fish in the sea
travelling the paths of the ocean.
YHWH, our Lord,
how great your name throughout the earth!

Now that we have the Psalm in front of us, we can consider the proper context. Notice first that the word "god" in this translation is not capitalized. The footnote for verse 8 states, ""The author is thinkin gof man in comparison with the mysterious beings that constitute the court of YHWH, Ps 29:1+, the 'angels' of Greek and Vulg. see Cf. Ps 45:6+"

With those directions, I look to Psalm 29:1:

Then I went to look at the margin to see what directions this Bible gives me for  understanding Psalm 8:5.


"God said, 'Let us make man in our own image, in the likeness of ourselves, and let them be masters of the fish of the sea, the birds of heaven, the cattle, all the wold beasts and all the reptiles that crawl upon the earth."


"Yet God did make man imperishable,
he made him in the image of his own nature;
it was the devil's envy that brought death into the world,
as those who are his partners will discover."


"The Lord fashioned man from the earth,
to consign him back to it.
He gave them so many days' determined time,
he gave them authority over everything on earth."

Taking all those scriptures into consideration, it is clear that God did not establish Man to be above the angels. First, in looking at the Psalm itself in its full context, the Psalm indicates Man was granted dominion over the earth and the creatures of the earth; to wit, all the works of God's hands here on earth. Man, too, was fashioned from the earth he rules.

Looking also at the fact that the word "god" is not capitalized, the footnotes in the Bible ring true; the word is not referencing the Lord, and doesn't use the Tetragrammaton as it uses throughout the rest of the Psalm when speaking of the Lord. Rather, the reference to "mysterious beings" and the common language of the Greeks for "gods", used poetically to mean "angels" in the Hebrew context does make sense. Therefore, the Psalmist was not saying that Man had ever been higher than the angels. If so, where is the reference to Man being set above the angels? It isn't there.

Secondly, then, I looked to St. Thomas Aquinas. In the Summa Theologica, Q108. Article 8, Reply 2, he states, "The angels according to the order of nature are between us and God".


Now, that brings us to your second question:

I am aware that there is ONE human being that has risen above the Angels. That is, of course, the Queen of Angels the Holy Virgin Mary. Yet, I must consider that she is hardly the answer to that question. She is, after all, a VERY VERY SPECIAL human being. God touched her nature in a very special way at her very Conception. She had a very special relationship to God in His human life on Earth. And of course there is her EXTRAORDINARY virtue to consider. She has the whole package in a way no other human, that isn't also God, has had or will ever have again. If we were talking math and statistics, I would consider the Virgin Mary an OUTLYER than skews the results. I can't help but think, "Yeah, SHE is held in Higher esteem by our Lord than the Angels, but....Who ELSE could God hold closer to our older brothers, the Angels, than she? There can't be anyone else."

The Angels were created as pure spirit and in the beginning, had free will. It was the creation of Man and God's plan of salvation that brought about the division of angels and demons;  those who, led by Lucifer, cried out, "Non serviam! I will not serve!" made their final choice in that moment. That was the, for lack of a better term (in my vocabulary in any case) the particular judgment of the spiritual beings we call "Angels".  After that point, Angels no longer had free will because it was not and is not necessary.  Angels are more intelligent than we are, they are always privy to the Divine Processions, always gaze upon the face of God, and always did. 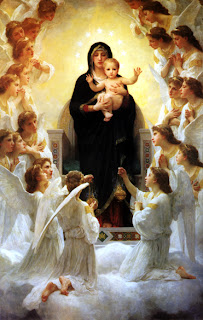 As you alluded to, through the action of the Passion, Death, and Resurrection of Christ, God did indeed create Mary immaculately, preserving her from the stain of sin, and to her, He gave jurisdiction over the Angels. This is why she is called "Queen of the Angels" in one of her titles. It is why in art that the Archangel Gabriel kneels before her; the art is revealing this truth of who she was and more importantly, who she was asked to bear. It was her fiat that brought salvation into the world, and for this reason, she has been elevated the Spouse of the Holy Spirit, Queen of Angels, Queen of Heaven.

Keep in mind that Mary also had free will; she could have refused the Angel's message. She could have said "no". But no, she bowed her head and in joyful humility proclaimed, "I am the handmaid of the Lord. Be it done unto me according to Thy Word."

And the Word was made flesh and dwelt among us.

We know how this story ends!

I hope that helps, Jose, and I hope my very brief, in-a-nutshell explanation suffices! Please let me know where I have been unclear or of course, if I botched an explanation. This, of course, is not meant to be an entire theology of the angels, but there are some wonderful books out there that cover the subject. I believe. Fr. Groeschel has one and I can think of a few others as well. Unfortunately I can't recall their titles so hopefully someone will happen along and help us out!
Posted by Adoro at Tuesday, June 05, 2012

Adoro, as always, thank you so much for taking the time to answer my question. I think you left no aspect of my question unanswered, and the Cross referencing of the Bible verses was especially awesome. I have been reading a book on the Angels by Father Parente, and he seems to agree whole heartedly with you. It's a subject I adore. I will definitely be looking up Fr. Groeschel's work on the Angels as well. Gracias!

LOL...I'm guessing you know more than I do about the subject, actually!

If it's in your area, I could recommend a wonderful graduate program.... ;-) You'd LOVE it!

Fantastic explanation. It cleared up a few things for me as well. Thanks.

I know this is odd to bring it up again after so many days but the thought stuck with me. There are Graduate Programs on Angels? That rocks.

I don't know of any graduate programs on angels. I've looked at my post and...OH!

No, as far as I know there are no grad programs on angels. I was referring to an awesome Catholic Theology program to which I could refer you if the cohorts exist in your area. They aren't about Angels, but will help you understand the theology of them in the proper context of Catholic theology as a whole!

So sorry for the confusion!

Oh, don't worry! Confusion tends to happen around me. Yes, there are some pretty good Theology Degrees in my area. St. Mary's University gives 50% Scholarships to anyone willing to study Theology here in San Antonio.