Well, the end of my Advent is shaping up to be...not at all what I planned or expected.

Remember the puppy from last week? Well, on Monday he went to a new foster home with children, more space - everything he could need! I've seen pictures and can say confidently that it was the right decision and even though I loved the little rug rat, he needed far more than I could offer, and my own dog needed far less than that pup was offering her!

After that experience, of course, my week was pretty calm and I finally got most of my Christmas cards out.

Then yesterday (Saturday), I received an email - could I emergency-foster a 1.7 month old Rottweiler who needed to be moved from his current foster home ASAP? I looked up his info on the rescue's web page, called the rep back and obtained a little more info on him. It seemed appropriate to take the risk.I said Yes.

We introduced my dog and the newcomer on neutral ground and walked them back to my house where they actually began to play. The young Rottweiler, however, was not quite really understanding play-time. He first didn't seem to understand my dog's play-bow in his direction, then started "copying" her moves - it was quite hilarious! My favorite, though, took place much later in the evening after he'd had his dinner. While my dog finished checking his bowl for crumbs, he began inviting her to play. He pounced and pounced and wheeled around and play-bowed - to my dog's butt! She was totally oblivious to the desperate drama taking place behind her.

Unfortunately, though, although all of this was hilarious, it again quickly got very old for my dog and she began seeking solace from me just to get away from the young dog's playful advances. I also ran into a great deal of frustration as the dog is still "intact" (ahem!) and as such, has a hobby of "marking". It doesn't matter how often I have taken him in and out throughout the evening and day. The moment we come back in he's alternating between trying to chew on me (OW!) and lifting his leg on something. I have to watch him very closely and the moment he even SEEMS to be sniffing I yell a warning to him so that he will desist.

The best, though, was this morning. We must have walked for about 45 minutes or an hour and he absolutely REFUSED to "poo". We got inside, I took his leash off thinking perhaps he'd go next time I took him out. As long as it took to turn my back, he had peed and pooped all over the floor!

I cleaned it up, took him out and threw the "refuse" in an area of the yard so that he would associate that with the business that belongs OUTSIDE.

Somewhere in the middle of scrubbing the carpet...and the chair...and the carpet there....again...I realized it would behoove me to buy stock in "Nature's Miracle." As it was, I had to go back to the pet store today to get MORE of it!

Now, it is a consolation that this dog won't be with me for long. I know someone is already interested and I advised his rep that I can't take him with me for Christmas. He's far too rambunctious and out-of-control and I'm terrified he'll both pee all over my brother's house and potentially knock my mother down. Not a good risk.

Mind you, this dog is not mean or aggressive. He's just a very large puppy who doesn't understand manners. He's also cooped up right now in a small house with no way to run freely to get his energy (and other stuff - ahem) out.

So it was this morning that I mused and prayed and mused again on my way to Mass. I swore to myself I would NEVER take another puppy again because both my dog and my house are just not good for puppies. As it is, I'll have to kennel the creature so I can wrap Christmas gifts, and I can't actually get anything done unless it's something that can be completed in 5 minutes with a constant shift of attention to see where the dog is and what he might be sniffing. Or chewing, for that matter. (He really likes my cedar chest.)

I'm having to develop ADHD as a coping mechanism!


Then it struck me: NOW I know what's going on!
At the beginning of Advent I once again offered a little prayer and asked God to help me become more patient, more caring, to grow in virtue in these areas. I shuddered as I offered the prayer because those virtues, much like asking for humility, tend to be answered with a Divine bat upside the head!

This afternoon while I wrote a "bio" for the foster dog to help him be adopted, I still felt frustrated and found I had to dig to really look for this dog's great points. I know he's a good dog and deserves a good home. I know he's more rambunctious with me because he's free to move around, has another dog to play with (when she does play), has a person to walk him and pet him and give him awesome food. He's responsive, he is protective, he is playful and won't let me out of his sight. That means he bonds quickly. He is exactly what a healthy dog of his age should be, minus a bit of training for he has clearly been neglected in that area.

In other words, what does he need from me? Patience and understanding!

OK, God, I get it. Thank you for answering my prayer. *sigh*

My dear friends, do take care what you ask from God, because if you mean it (and He always knows if you do or not, even if it's only a little), He WILL answer. And seriously, I mean it, BE CAREFUL!

I'm just sayin'....if you ask for patience, humility, or a chance to sacrifice....God might answer your prayer just like He answered mine: by sending you a  65 lb unschooled young Rottweiler! 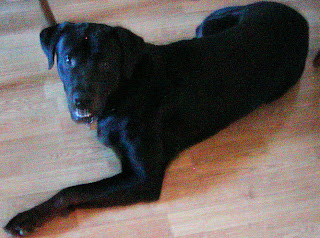 Email ThisBlogThis!Share to TwitterShare to FacebookShare to Pinterest
Labels: Foster Dog, Humor, Not What You'd Expect

I can't actually get anything done unless it's something that can be completed in 5 minutes with a constant shift of attention to see where the dog is and what he might be sniffing.

This describes my life perfectly right now! My son is 17m old and in the last week has learned how to open doors and climb out of his playpen. Except he doesn't sniff things. :P

LOL! Well, if he DOES start sniffing things that would be a problem!

LOL, I know what you mean about being careful what one prays for. Once after we had moved to a new town, I prayed for a friend. What I had in mind was someone like my college roommate, who was like a sister, shared the same interests, etc. What I got was a needy, clingy neighbor with marital problems who came over whenever she was lonely or bored. Which was often. I think God was trying to tell me I needed to be a friend rather than have a friend; I don't know that I did that good of a job of it!

Great post. Brought a smile and a laugh or two. I think you have more patience than you realize!

A beautiful doogie Adoro. Bless you both.