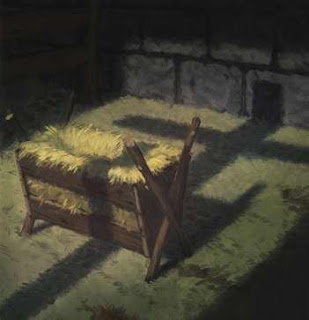 God, the Almighty, the Great I AM, condescended to be conceived in the womb of a simple virgin, to be carried there for nine months and then...and then....was born immediately into filth, destitution, and a state of utter humiliation.

He was born of a pure woman for He had called her into being and through a singular grace, had removed the stain of original sin in order to reveal Himself to the world, even though He knew the world would be utterly scandalized by the grace shown to Mary, the Mother of God, and the rest of us who were not preserved by such a grace. He knew we would be forever scandalized by His perfection in a world more willing to choose sin over holiness. He knew we would be scandalized by His own followers who would continually try and fail, or perhaps not try at all even though clinging to His Name.

He knew He would be utterly rejected, utterly defiled, utterly destroyed in His body...and in so being would utterly decimate sin in order to restore humanity in His own act of satisfaction for sin.

Jesus, Son of God, Incarnate at His conception within the womb of Mary, gives testimony to the Glory of God, His plan of salvation, and the beauty and perfection of the life we are called to live...for eternity.

As we weep here below in this vale of tears, turning our passions to pleasure, and reaping only the consequences and remorse of sin, we are scandalized by the example of Christ who was born to give dignity to our flesh, to heal what we willfully severed, and to render justice by paying the ransom we cannot pay even if we truly cared to do so.

Advent is such a time to consider the scandal that is the coming of Christ, the scandal brought to the forefront of our culture for MONTHS every year. Even as we who love the liturgical seasons scream and cry at hearing Christmas rejoicing before Halloween, perhaps we have to admit that actually, Christ still reigns because one cannot help but think of Him somehow.

Even as we Catholic pray for Holy Souls and recognize the Saints who have become like Christ, the music that celebrates His birth plays in the background in our secular world.  Is that not a sign of hope? The world desires it for merely material means, but really, is that any different than when Christ walked the earth? After all, they tried to make Him an earthly King, a political figure, an economic figure.


The Poverty of Christ
Jesus was born into nothingness, unknown to those around him outside of His Mother Mary and St. Joseph, husband of Mary, earthly father to Jesus, our Lord and Savior. They were humble people of little means and could find no room in Bethlehem, anywhere, even for the Son of God. No matter that Mary, swollen with the life about to burst forth from her in a ray of light for the world, could barely walk so close was her Hour; there was no place for her and her child.

There was no room. Bethlehem, "House of Bread", relegated the Holy Family to the crust.

Ponder that:  Jesus was born into a world that would not make room for Him.

Is it such a surprise that nothing has changed?


The Scandal of Advent
We Catholics are called away in Advent, to be quiet, to pray, to spiritually prepare our souls to receive the Christ Child.

We are called to make room for Him in our lives, if we have not already, and if we have, to make MORE room for him. The odds are most of us think of Him only on Sundays when we have to go to Mass, or take our kids to religious education, or maybe to put a creche out as a reminder that this is what Christmas is all about.

At the same time, we are in the middle of  all the insanity as life becomes more and more hectic, with the demands of social engagements, and the traditional demands of preparing for the Feast, for family, Christmas Pageants, end-of-semester final exams...the list goes on. We are called to withdraw from the world just as the world, including the Catholic world, ramps up demands upon us.

This is scandalous, and quite appropriate, for in all of this, we are better able to experience the journey Mary made as she traveled from Nazareth to Bethlehem, passing beneath the shadow of the Cross in order to truly enter into it and make it her own.

This paradox of our Christian life against the opposing forces of secular life is the scandal of the Cradle and the Cross, and the wood is exactly the same. It calls for sacrifice, for suffering, for longing for the peace that can only come through Christ, our Savior, the Light of the World.

It is no wonder that Advent is such a tumultuous time; it is meant to be so, for only through passing through and embracing this valley can we ever break into the light and fall at the feet of Our Lord.

We long, in Advent, for peace and quiet, for the end of the demands upon us, for the crowds to leave us alone. We long for the solitude of our homes and families, for simple comforts, even when we are surrounded by lavish soirees and temptations of materialism.

In the end, our souls crave the very poverty of Christ, not understanding that we are already experiencing that poverty for our world is not wealthy; it is poor.

This world, this very economically wealthy world, is actually very poor because it does not have Christ, does not want Him, does not realize it needs Him.

We, personally, are poor because we do not have Christ...and we have not yet made room for Him.

Before the celebration of His Birth, we must take time to make room, even amidst the chaos. We must find that place in our souls where He rests, and if that space is taken up by sin , we must eradicate it.

Advent calls us to change, to look towards our ends, not just our present. For what were we created? For WHOM? Why? Have you ever wondered at the violence of the Advent readings, those that fortell the end of the world? Those readings that so harshly condemn sin and state clearly those who will not enter heaven?

It is to remind us of our Final Judgment, for as Christ came once, softly, through the womb of a virgin, then He will come with violence, and that violence will bear it all away.

Jesus came with violence in His humility, and first sons were slaughtered shortly after His birth.

The slaughter that accompanies His Second Coming may include us, and if the blade of His Just Judgment hits our own necks, we will be separated from Him for Eternity.


Advent is a call to eternity, a call to holiness, a call recognize the Kingship of Christ, to make room for Him, for if we do not do so now, will we ever?
We must live each day of Advent as though He is being born through us at any moment. Have we given our own Fiat or have we turned away and told Him we have no room in our souls for His gift of eternal life?

Christianity is only scandalous because it calls us out of ourselves, out of the darkness and into the eternal light and life of Our Lord Jesus Christ.

It is scandalous to the world because we the faithful so often try but fall, again and again.

It is scandalous because God's Mercy has more depth than the deepest ocean and more light than the brightest sun. We cannot escape His Mercy, but we can reject it and in so doing, purchase eternal damnation.

And that is scandalous, that He would allow us to reject such Life in favor of eternal corruption. 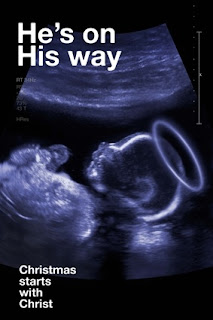