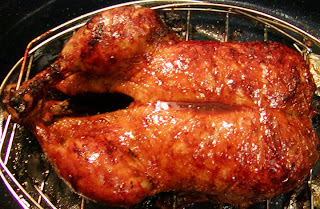 It's possible that some of you are waiting with bated breath to find out whether I burned the house down when roasting duck for the first time. Since I brought it up, I thought maybe it would be nice to share the result with you.
The image you see is the finished, freshly-glazed duck roast, complete with spicy soy glaze, the result of nearly 6 hours' work.
As this was my first duck, I took photos throughout the process, wanting both to learn and compare what I was doing to the recipe I used to do it!

In the end, the finished product was nearly divine, there was NO fat on it, it was yummy, wonderful, and I had enough meat to make it into a nice stew. 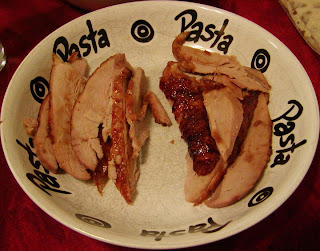 I will absolutely do this again, but next time I'll do a better job on timing. It took about 6 hours, considering the prep time (scoring and pricking it, trussing, cleaning, etc), then the time needed to remove it from the oven every hour to flip it over and prick it, then the finishing touches designed to crisp it up and set the glaze.

It was well worth the time and effort and, well, can I just say...yum!

If you're interested in how I did it, I used this recipe at Hungry Mouse, by far the best tutorial available. (My duck was a different brand and less fatty, but the technique still worked perfectly. Please note that she wasn't kidding about making sure you use the sharpest knife on hand!)

We didn't do this for Thanksgiving dinner (in case I wrecked it) but the day after, and used the leftover sides to accompany the duck. We also served it with a nice Pinot Noir which paired perfectly.

Yesterday I boiled the carcass for stew, strained out the bones, used the left over glaze for flavor, added celery, carrots and onions (which I'd sauteed in bacon fat), more rosemary, thyme, celery salt, and pepper, along with a bit of Worcestshire sauce. The end result a nice yummy stew that's going into my freezer, and the duck fat - the stuff of liquid gold for cooking - that'll come in handy with other recipes! :-)

I admit it; I'm a little proud of myself on this one because it intimidated me so much and given the price of duck ($3/lb), I figured it would be a huge waste of money if I messed it up. Instead I was able to provide a nice treat to my family, and they contributed, too, by way of extra hands to hold the pan, advice on carving, and of course...enjoyment of the finished roast!

I place this in my highest category:  Food I would serve Jesus. (The odds are that if Jesus came to my house He wouldn't have 6 hours to wait around for me to cook, but hey, if it was there and on hand, He would get the first slice!)
Posted by Adoro at Monday, November 29, 2010

Larry ~ We named him "Howie" and he was indeed delicious!