I Am the Dog, Baby

I was going to write about something else tonight, but instead, I have a rant. Sit down and hold on to your hats.

A few years ago, a reporter wrote an article in the Religion section of the local paper and by the wording, made it sound like a decision of our Bishop was "personal" (note the spelling). There was a HUGE outcry in the blogging world as everyone slammed the Bishop for making a "personal" decision with regard to a certain popular priest.

I went to the article itself, found the phone and email of the religion reporter and CALLED her to ask about the quote generating so much bandwidth. Was it "personal" or "personnel"? Which?  The spelling made a huge difference.

She returned my call and explained it was an editorial error: it wasn't a "personal" decision of the Bishop, but a "personnel" decision belonging to employer/employee, and that meant all the bloggers having hissy fits were hanging out with egg on their respective faces.

I think I actually made that phone call and got the answer while in the presence of actual bloggers, but it was so long ago I can't remember. I'm getting old. Memory is second to go, they say.

I've noticed a pattern, and I've been a part of it myself.

We go to Mass, at this or that parish, and not always our home parish. Whether it is "home" or some other, with the ability to speak to our "online friends" through Social Networking, we often bring our complaints. This alone is legitimate. We often experience liturgical abuses and need to vent, ask questions to see if what we noticed is legit or an abuse, or maybe we have nowhere else to go to explain our frustration with the lack of reverence we may witness in a given Mass.  It is legitimate to vent those frustrations, as long as we don't let those frustrations, or worse, anger, control us.  We should be asking for help not to further our vice of anger, but rather, to help us overcome our vices, to affirm what is wrong and help us to do or react in ways that give glory to God.

All too often, all I see, or all I do is "vent", slam, and yes, even calumniate.

All too often, when others do so, when questioned, they tend to either back down or refuse to go to the source.

My friends, this is not reasonable. It is, officially a sin, for it is contrary to the intellect and will, and therefore, it is an offense against God.

We really need to examine our own consciences regarding our intentions when we use social networking. Even tonight a friend of mine brought to issue a reasonable question for which that person refused to seek the truth.

It really is easier to run away like Judas than confront offense as directly as Christ.

If your brother sins against you, go and tell him his fault, between you and him alone. If he listens to you, you have gained your brother. But if he does not listen, take one or two others along with you, that every word may be confirmed by the evidence of two or three witnesses. If he refused to listen to them, tell it to the church; and if he refuses to listen even to the church, let him to be you as a Gentile and a tax collector.

Canon Law follows this procedure, requiring that the person (usually a priest or bishop) allegedly offending is first confronted before the person making the complaint goes to the Bishop or other proper authority.  There is great reason in this: it is to prevent the sin of defamation of character, to keep from someone being slandered in the eyes of others. The procedure itself, via scripture or via Canon Law (which is one and the same in this case) is to ensure the examination of conscience and purity of heart in the one making the accusation.

It IS very frustrating, but more and more, I am becoming aware of the damage done by those with a voice who either don't know or won't follow the charitable procedure of confronting the offender directly.

Too often, names and situations are smeared through Facebook, Twitter, Plurk, and Blogs, without the person speaking ever to bother to go directly to the one being "confronted" to address them directly.

All too often, those using Social Networking (again, I am guilty, too) fall back on our own laziness so as to bitch and complain without any real intention of correcting a problem.

Recently a friend, one both online and in real life brought up an issue in a parish she attended. She asked a good question, and one that needs to be asked and addressed according to the theology of the Church.  The question asked is one that could be charitably sent to the "offender" and perhaps answered. This friend refused to do so and made every argument not to, even refused to let me send the (charitable!) email or note, and then told me that I "didn't have a dog in this fight." 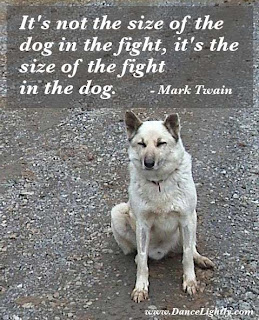 Telling me that I don't have a dog in this fight means that you're telling me I'm not Catholic.

Are we not the Mystical Body of Christ?  If one of us suffers, do the others remain immune? If you experience a horrible liturgy at one place and refuse to tell anyone, do I suffer more or less than you do if I attend there after you have passed by and refused to do nothing about it, saying that I "don't have a dog in this fight."?


If a heretic farts in the wind, aren't we ALL downwind?
Doesn't that happen every day and aren't we all sick of the smell?


Listen, ya'll, whether we know each other personally or not, we're all together in this mess. If we are Catholic, we are members of the Mystical Body and if there is a public offense against theology and liturgy, it hurts us all and we have a duty, obligation, and right to question it.

Don't EVER tell another Catholic that they "Don't have a dog in the fight" or that their concerns regarding an objective theological/ liturgical matter are insignificant.

To do so is an insult to the entire Body of Christ.

Y'all, you ARE the Dog, and if you're not in the fight, Christ is not your King.

LOLOLOL! I love when you rant. You're hilarious AND reasonable, so rare in this day and age.

My first comment is that the pic of that dog remarkably resembles the dog I had in childhood. WOW.

My second comment is, it's amazing what a missing letter or word will do. The writer in me is fascinated by this.

My third comment is, yes, it's too easy to slam people online without confronting them. And being charitable online is more of a challenge, especially if you are someone who likes to use a moniker and not a real name.

I have a rule that I try to follow--never say anything online that you wouldn't say to a person's face.

In some cases, I have been the dog and have gone after people online and in person (verbally, that is) because those people completely offended my sense of morality. Like you, I have a dog in the fight.

There are certain things that really will make me bite someone's head off. Fortunately, there aren't many of those things, which means I can keep my teeth fairly clean.

Thank you very much for posting this!

You rant much better than I.

Does this posting have anything to do with the comments you made about Carol McKinley at Abey Roads?

Maria ~ I don't even know who Carol McKinley is.

If you're referring to a comment I made over there a few days ago about 2 adults having a hissy fit at each other, no, this post has NOTHING to do with that but is rather a general observation from my several years of blogging & social networking.

Sounds like you know what I am referring to. The "hissy fit" you describe was her effort to defend the teachings of the Church. Sadly, she was persecuted in the process.

Maria ~ Well I'm not going to do the same thing in my own combox that I was criticizing over there, that being having an out of place debate about something that has NOTHING to do with this post.

I don't know what was going on with that awkward match between 2 adults whom I do not know.

As far as "persecution" I don't know anything about that.

Nor am I going to discuss it here as it is OT to this post. Thank you.