In the Shadow of Your Wings

Have mercy on me, God, have mercy
for in you my soul has taken refuge.
In the shadow of your wings I take refuge
till the storms of destruction pass by.
~ Psalm 57
This morning I could not take my eyes off of these words from Psalm 57. Even when I tried, I was drawn back, especially to the phrase, "shadow of your wings". What did that really MEAN?

It wasn't long before the connection was made, for as I knelt in adoration of our Lord, my eyes were also drawn to the cross, where Christ was stretched upon it, His hands and feet nailed to the wood. His arms stretched out like...wings.

And there it was; under the shadow of His wings, I will take refuge. The only refuge in the storms of destruction that wail around us all is the folly of the Cross, in which we find the Glory of God in the redeeming sacrifice of His Son.

The shadow of the Cross and the shadow of His wings are one and the same. If we are truly seeking God, we would do well not to flee from the Cross, but rather to run towards it and embrace it with all our might, seeking to remain in its shadow for life.


You have kept an account of my wanderings;
you have kept a record of my tears;
are they not written in your book?
Then my foes will be put to flight
on the day that I call to you.
~ Psalm 56
The children of this world look upon the Cross now just as they did then, pointing and jeering, still seeing only folly. Even as they reject the suffering of Our Lord as "violent", they turn to their own infants and inflict the most terrible violence as they rend them to bits in the womb, or determine the aged or infirm no longer have a need or right to live. The children of this world cry out against the sacrificial violence that bears sin away, as they themselves gnash their teeth and riot in demonic anger at the Christians who have fled to the Cross and live peacefully beneath it, embracing life, bearing the storms that MUST come to anyone who truly seeks to be united to Christ.

In taking refuge at the foot of the Cross, we do not flee the world, but see it as it truly is, and see, in Christ who was lifted up and drawn us to Him, the glory of eternal life. The folly of the Cross is the redemption of sinners, and the Glory of God through the obedience of His Son. 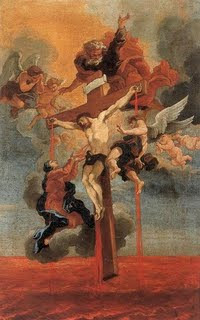 
When the temptations encroach upon us, let us take refuge, then, in the shadow of the Cross and allow Jesus to fight the battles we cannot face on our own. Let us flee into the shadow of His wings and allow the Precious Blood of our Redeemer to cascade upon us in a flood of salvific love.

Psalm-prayer
Lord, send your mercy and your truth to rescue us from the snares of the devil, and we will praise you among the peoples and proclaim you to the nations, happy to be known as companions of your Son.

Email ThisBlogThis!Share to TwitterShare to FacebookShare to Pinterest
Labels: Cross, My Favorite, Repost

BTW: Re: your search for a 1966 Jerusalem Bible; I think we might have one here; will check ( we have all kinds of everything here!)...will let you know.

nazareth priest ~ REALLY???? So...if you have one can I borrow it for an unspecified period of time??

Um...unless you need it....then can I just go on sabbatical and monopolize it for awhile?

Your readers may be interested in the latest number of a Catholic heritage journal from Ireland entitled CHRISTVS REGNAT:

God bless you my brother.
I am a franciscan frier in Brazil.
Congratulations!
Frei Alvaci

pvfranciscanos ~ Thanks and God bless YOU Brother! (I'm actually your sister, though) :-)