One week ago today, I graduated with my Master's degree. 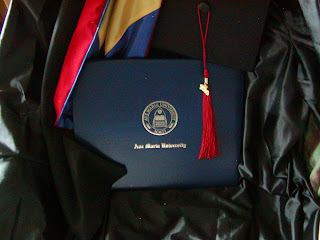 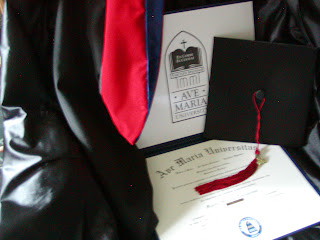 Finally, finally I had the opportunity to open the the leather-bound, gold-embossed degree the Bishop had handed me. I stared at it a moment, noting it was all in Latin.  "Oh my gosh, I have a Master's Degree and I can't even READ it!"
It's good to have a reminder to remain humble, that although we have learned a great deal, we've only scratched the surface. It is an invitation to be grateful, and yet, to go deeper, to continue seeking the Truth.
Our Graduation was a bittersweet event, almost painful in its intensity. I do have a sense of accomplishment, though, of having completed something I set out to do, finally. I know it is a gateway to something, a simple stone on the path I am following to Calvary, and now my foot hovers in mid-air as I try to see the next step.
*                 *               *
Posted by Adoro at Saturday, June 12, 2010

Congratulations! Your comment on the Latin diploma made me smile. Mine MA diploma is in English, and when I transferred into a PhD program in Moscow, its authenticity was questioned because "vse amerikanskie diplomy na latinskom yazke" (all American diplomas are in English), the Ministry of Education told me. It took a back-and-forth email conversation between one of the ministers of education and the registrar at Penn State University before Russia found my MA diploma acceptable. (Ironically, I could have read the Latin, but I got the English!)

I know you will use your degree to good avail and in service of the Lord.

Have a blessed day!

Congrats again. May God continue to guide, bless and keep you.

If you have any pictures that we could put on the Schola FB page, it would be appreciated.

Also, I would like a copy of the Commencement "Lecture" when it becomes available.

Sorry, Ray, I got nuthin' at all. And personally don't want any pictures of myself on anyone's web page.

It was a most beautiful Mass and Commencement ceremony...and the Bishop's homily was very moving...
congratulations for your hard earned degree..I know; I had to "earn" it myself some eleven years ago!
So glad to be a part of it all.

Did you mean to say your degree was in English and the Russians thought all American degrees were in Latin so disbelieved you? (Doesn't the "na" in Russian mean a negatory statement?)?

I just want to be clear as to what happened in your case! :-)