Life in the Convent

They go about the business of holiness matter-of-factly, their Catholicism and prayer never forced, but rather, a simple way of life that infuses every movement, every thought, every routine. The Sisters are not apart from God in any moment of the day so do not find it necessary to make loud ejaculations of praise or scripture quotation common to the secular world inhabited by people who almost wear desperation to appear to be Christian in every movement. In the convent, devotion to Our Lord is a given and does not need to be loudly announced; it is far more proper that devotion be quietly and sincerely lived. 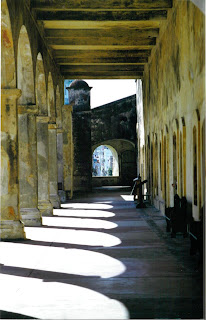 I love reading these posts, Adoro. Thank you for sharing with us.

:)...Loving these as well...though for my journey, I don't think I'll be posting much to the public eye, selected e-mail eye :)

Joe ~ I'm only making the practical stuff public. A lot of people wonder "what it's like". I can answer that in the journalistic way. But the interior stuff..that's in reserve.

Some things are just too beautiful and awesome to share. Words would bring them down to some human level.

awesome! thanks for sharing :)

Just like our house, Give or take a few minor differences! It appears life in noviciate is pretty universal. I'm waiting for the post on personalities within community! (Double Dog Dare You!)

Very very interesting. This is much better description of actual daily life than I find on basically any order/community's website purporting to describe such.

I wonder a bit about your choice of the phrase, "deprivation of personality".

Angela ~ beauty doesn't always have anything to do with it. Some things are simply not meant to be shared or are too difficult to share. It's not all peaches and cream.

You Know Who ~ I wasn't there long enough for that, so no, I won't be writing about personalities

Hidden One ~ REad the paragraph again. It's a commentary on the false view. The romanticized version doesn't leave room for personality. Thus "deprivation of personality" which does NOT exist in real life.

I understand your intent, I'm just not entirely certain that such a life would necessitate/involve a lack of personality.

Hidden One ~ You misunderstand. That is my very POINT. If religious life necessitated a complete deprivation of personality....who would be attracted to it? Personality is a REQUIREMENT!

It is the secular romanticized ideal/misunderstanding that casts religious as wooden people with no personality.

I am not doing that. I'm stating, very clearly (so I thought) that this is not the reality.

My first 2 paragraphs are about the reality in prose. Then a paragraph of juxtaposition of secular culture's perspective and the final sentence pointing out the flaw.

Sorry I wasn't clear. I can't seem to make this post say what I intend, apparently.

Well I understood you perfectly clearly. I'm very glad to read exactly what you wrote here.

God bless you all, it was my calling years ago, and i never took heed, now years on i regretted it.
If you are called answer it, as you will regret it later on in life like i have...

Anonymous, I don't mean to pry, but how did you know you were being called to this life?

Anonymous Jan 1 2012 - Please note I do not accept anonymous comments any longer. Why?

Exhibit A: the anonymous entity to whom you just directed your question has NO IDEA you just asked it and will never be back to answer.

Exhibit B: No one knows who YOU are either and since you cannot subscribe to comments as an anonymous poster, you won't be notified of a response.

If you have a serious question, feel free to email me for a generic response or just search the tags in my sidebar or click on the tags "discernment", "religious life" and "vocation" at the bottom of this post.

As this is my blog and I've written a LOT on this topic, you'll find a lot here, including in the comments section. But the person to whom you addressed your question is unfortunately, as unknown and impossible to recognize as you are.

Blessed Solemnity of the Mother of God, and prayers for your discernment!

NOTE TO ALL FUTURE POSTERS: ANONYMOUS COMMENTS WILL NOT BE PUBLISHED. IDENTIFY YOURSELF WITH SOME KIND OF HANDLE. SEE COMMENT POLICY IN SIDEBAR.